Old School Road Trip ahead. I-5 South at Weed, California with the tip of Mt. Shasta visible in the distance.

Wow did we have fun last week!

My little Porsche Cayenne averaged 34 miles to the gallon, and she’s a pretty comfy ride!

We took my incredibly comfortable road trip car and headed down to California. The Peacemaker joined us. We have a friend who is a hobby photographer (and he’s pretty damn good) who had visited Yosemite a few years back. He took some spectacular photos, and ever since seeing those photos I have wanted to go to Yosemite. Apparently I was there as a child, but I have no memory. I started pinning photos of Yosemite a couple years ago on one of my dozens of Pinterest Boards and well, I just felt like the time was now. I knew it would be crazy crowded over Memorial Day weekend as some of the roads were just opening up and the snow melt/volume of water coming off the numerous falls was supposed to be spectacular. It’s a 12-hour drive to Yosemite National Park from our house, and we left on Memorial Day in order to miss the holiday weekend crowds.

There are many routes a person can take from Portland to Yosemite, but since we have made all those drives before to California, I opted for the straight route right down Interstate 5, and then over to Merced. The state of Oregon is quite lovely, but there are monotonous stretches of California that are a bit yawn worthy. The Mt. Shasta area, however, is gorgeous.

A vista point on I-5 with Mount Shasta in the distance.

We arrived Yosemite on Day Two.

On Day three we headed into the park. We didn’t do any long hikes the first day, we just tried to get our bearings and take it all in. We did small hikes to huge waterfalls and took a lot of photos.

Viewpoint at Tunnel View. El Capitan on the left and Bridal Veil Falls on the right. Our first day was cloudy, but no less magical.

I like to call this photo Coexist. Families biking along the valley meadow, half dome covered in clouds behind them, and a deer munching on grass while I take a photo about six feet away. An overwhelmingly tranquil moment in the park.

Upper Yosemite Falls in the distance. I was mesmerized by the reflection in the water. We spent quite a bit of time in this spot.

Dusk in the park, first day. 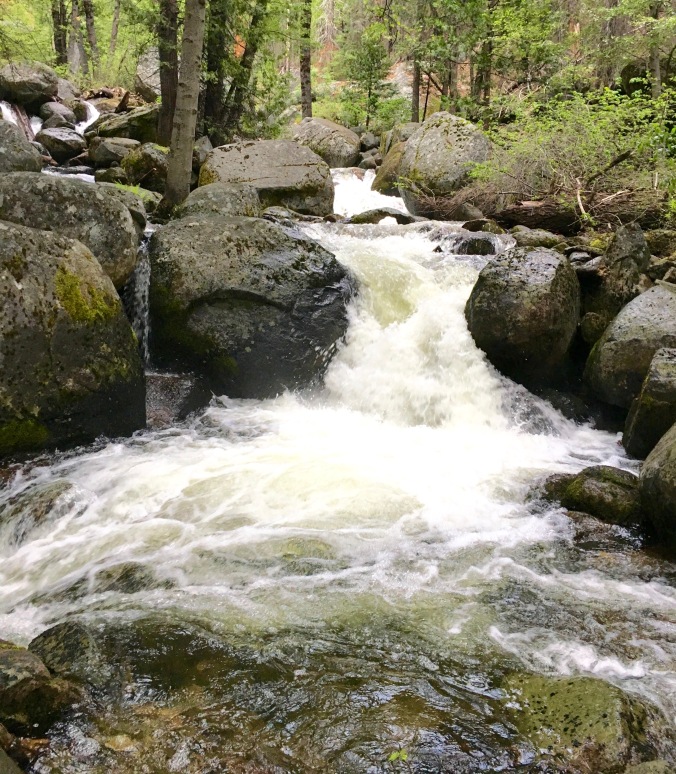 On our way out of the park on our first day, The Peacemaker and I hiked down to Alder Creek. This is just a snippet of the water flow, which at some points of the year is little more than a trickle. On this day it was at a roar.

We had planned to spend two full days at Yosemite. On day two, the weather did a 180 and turned very warm, with the bluest of blue skies.

Heading into the park. 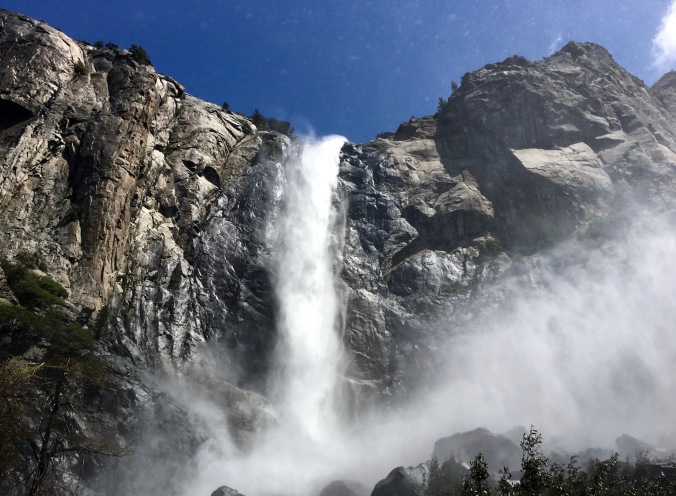 First stop… a short walk up to Bridal Veil Falls where my hair got soaked, my clothes got soaked, my phone got soaked, my shoes got soaked. I looked like a drowned rat and the day was just beginning. And the water coming off these water falls is ICE COLD. Thank goodness for the warm sunshine back down the trail.

On Day two we had planned to do a serious hike. We chose the Mist Trail along the Merced River, and up to Vernal Falls. This here is the Merced River at the bottom of the trail near Curry Village Campground.

The first part of the trail, although paved and easy to walk, was pretty much straight up hill leading to a footbridge that crosses the Merced River as the water storms off the mountain from Vernal Falls. Easy Peasy. 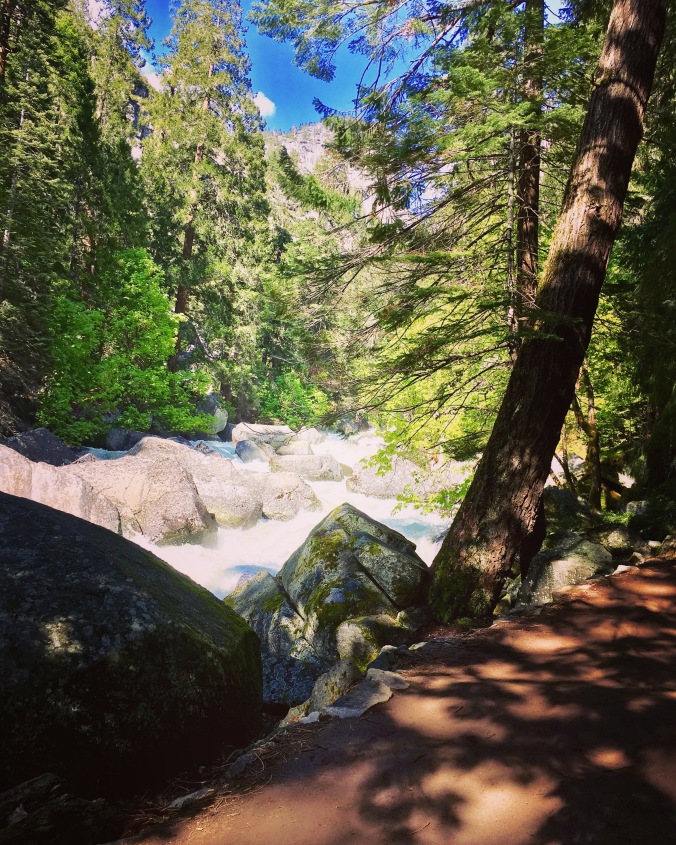 The second part of the trail is still pretty much up hill, a lovely red dirt path, shaded and gorgeous.

Now, the third part of the trail is where the fun begins. And by fun, I mean steep slippery granite steps going straight up, at least 600 wet, incredibly slick steps on the side of a mountain with a monstrous waterfall spewing MIST (yeah, the name of the trail makes sense now) all over you. As they say, you will be wet down to your underwear. NO KIDDING. This first little part is the mostly dry part. 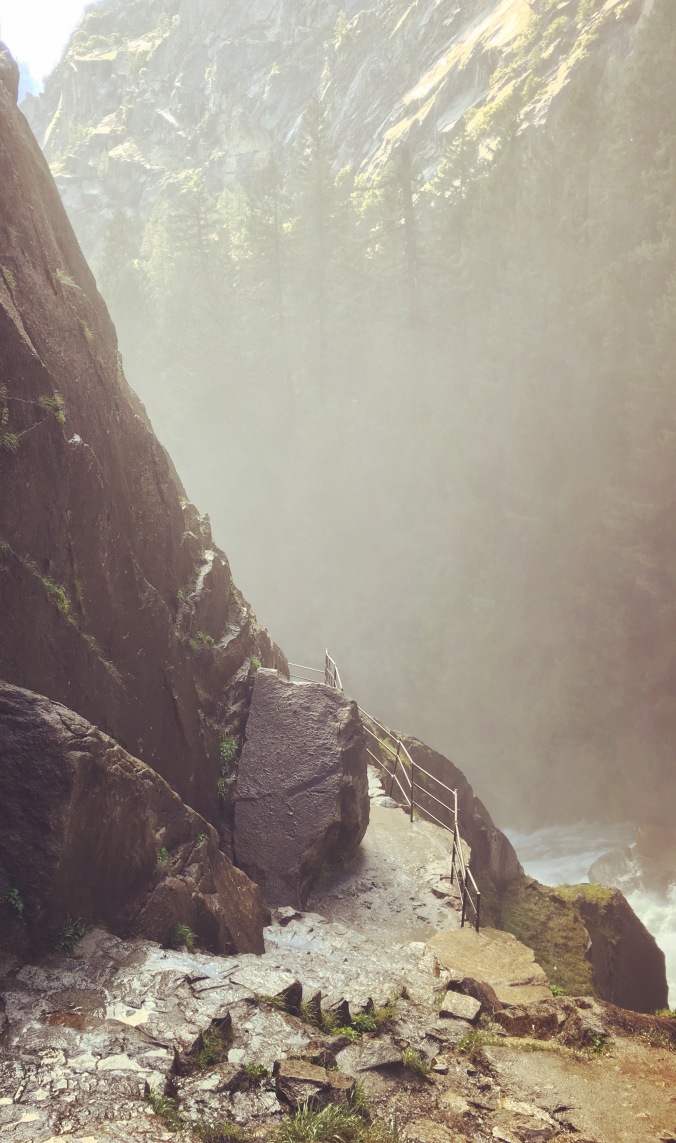 Just around the bend from the last picture… I was SO THANKFUL for that railing along the narrowest part of the path. I actually cropped Blue Eyes out of this pic, he was hugging the side of the mountain and imploring me with his eyes to just give him permission to turn around and go back down…. and I am the one that is AFRAID OF HEIGHTS! You cannot tell here how incredibly WET this trail actually is. By this point we could barely see from all the water dripping off of us. I was soaked through, shaking from the cold, my legs were starting to ache and feel rubbery from the height of the steps (not to mention the altitude), about twice the height of a normal step, but gall darn I was going to get my phone out of my drenched pocket, dry it off with, well, nothing really, maybe the inner pocket of my shorts, and get a picture of this. It was beautiful, but it was scary.

The view next to you as you are climbing the steps up up up. 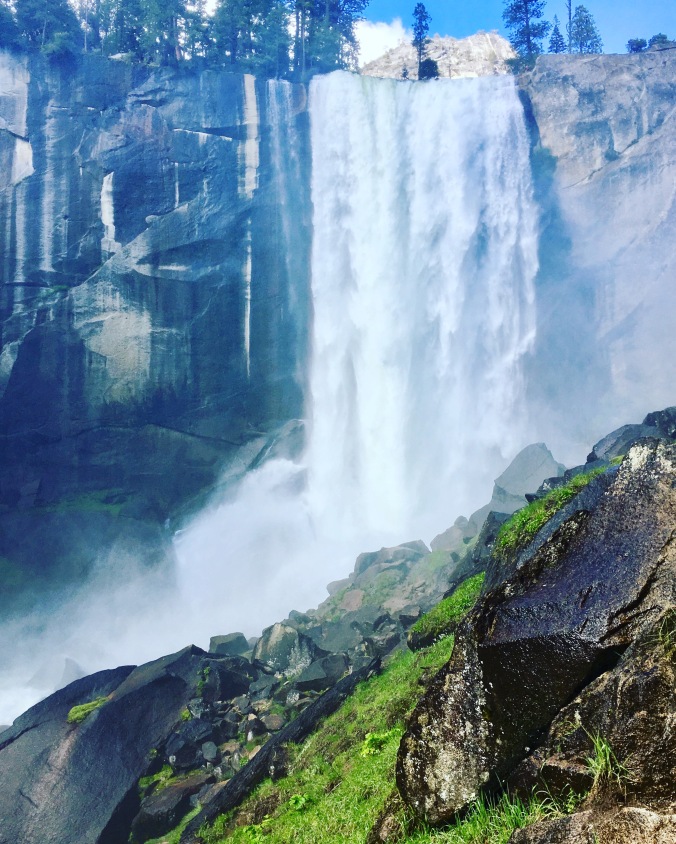 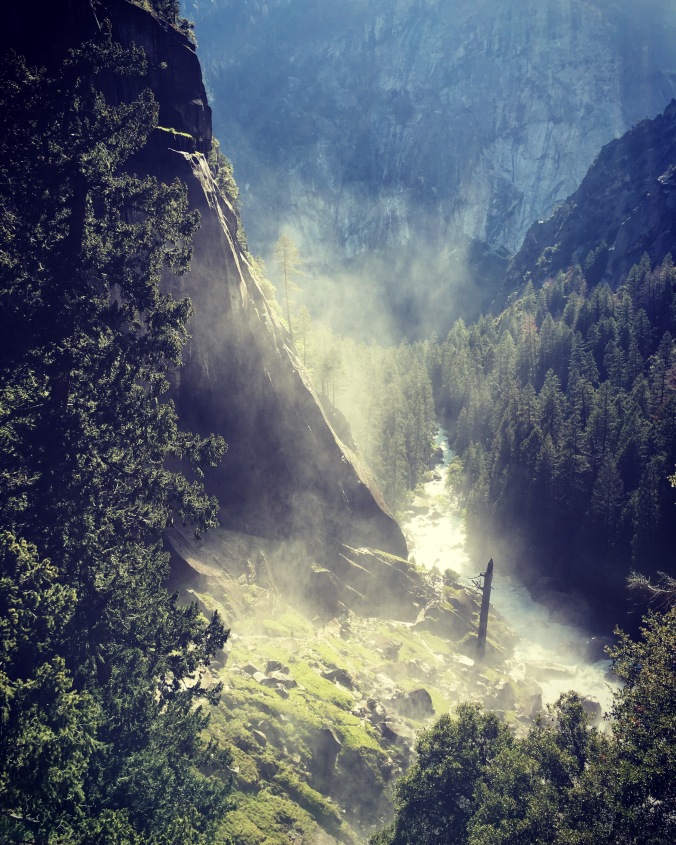 After climbing the 600 or so slippery granite steps, you come to a granite walkway/ramp carved into the mountain with, thankfully, a railing and when you get to the top, it looks like this.

AND THIS! The top of Vernal Falls. SO Magnificent. At this point, we deemed the whole thing worth it, BUT, we had to get back down to the valley and none of us wanted to go back down those stairs. We ended up choosing the longer route back down, which actually meant going up quite a bit more on the Mist Trail to Vernal Falls to Nevada Falls John Muir Trail? It was difficult for me to understand exactly where one trail ended and another began.

We hiked up and over to this footbridge that crossed the water flow between Nevada Fall and Vernal Fall. We had no desire at this point to keep climbing up to Nevada Fall. We took a couple photos and headed back to the John Muir Trail.

In summer and fall, the area down below is a tranquil looking section of water called Emerald Pool. At other times of the year it looks peaceful and inviting for a swim, HOWEVER, it is incredibly dangerous at all times of the year and healthy young men have tried to swim across the seemingly calm looking pool and got caught up in the treacherous current. Right now, in Spring, this area of the fall is raging. Beautiful and incredibly deadly. It will carry you right around the corner and over Vernal Fall, which is not survivable. 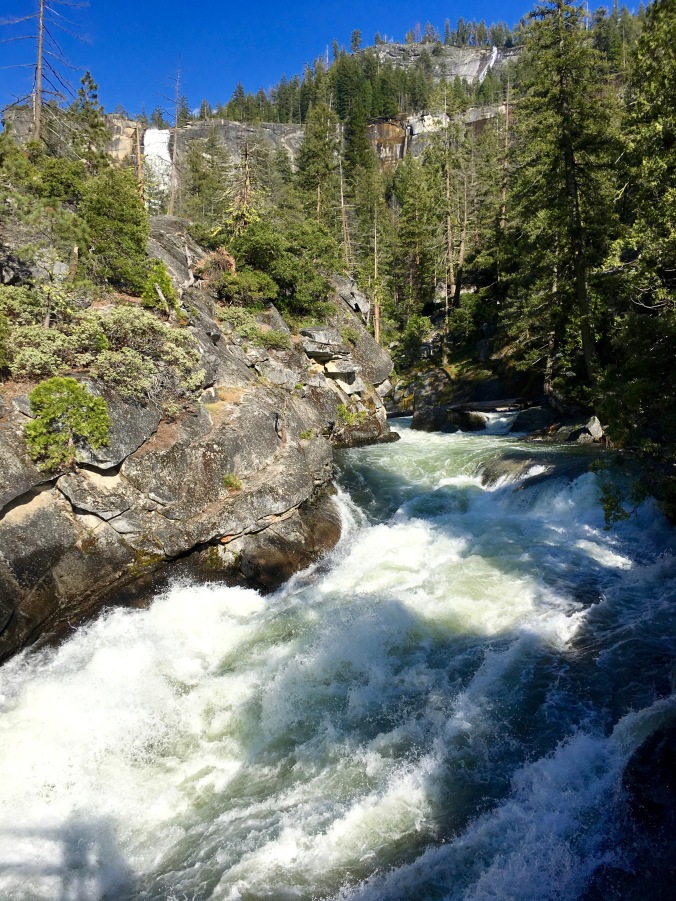 Nevada Falls, up top there. I love shadows. Here you can see my shadow, standing on the bridge. It really was an amazing day. 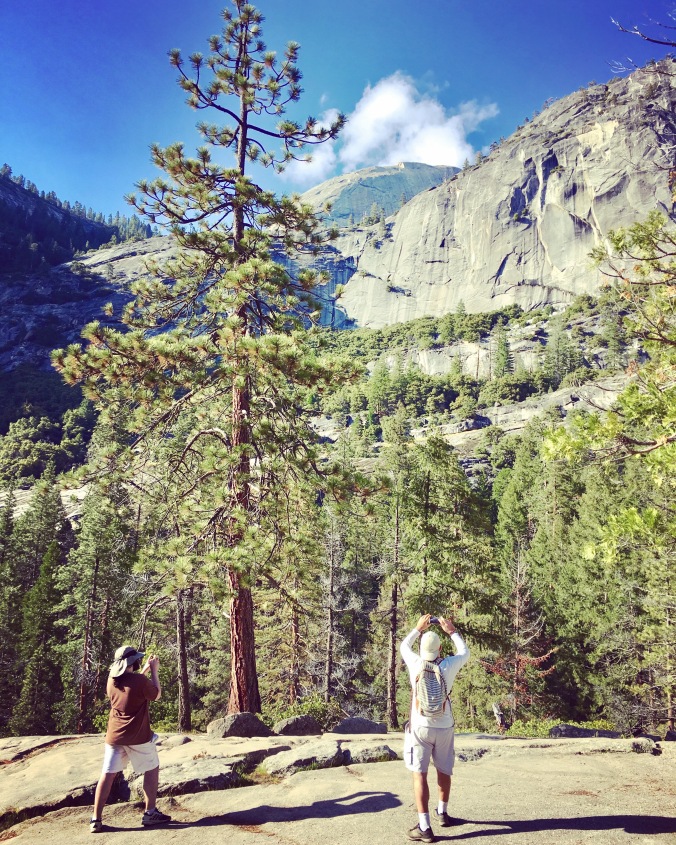 Right near the bridge was where we got our first trail glimpse of half dome (up top in the picture). Here’s my men getting their own photos. BE is almost always carrying something of mine. In this case, it is my favorite gray and white striped backpack. So versatile and lightweight.

The Peacemaker and I veered off the path and over to this lookout (with zero railing) to get a shot back down to the top of Vernal Falls. The little specks on the flat surface up on the right are people, right where we had just come from. And look at the spray off that fall… that is where we were climbing the wet granite steps. No joke, it was WET!!!

Once we hit about 8500 feet elevation (we had ascended over 2000 feet on the hike), we hit the three mile dirt horse trail that would take us back down to Yosemite Valley. The trail was sorta smooth in most parts, but other parts were pretty chock full of rocks, oh yeah, and horse poop. The mosquitoes got me even though I was literally carrying the bug spray in my hands and constantly spraying. 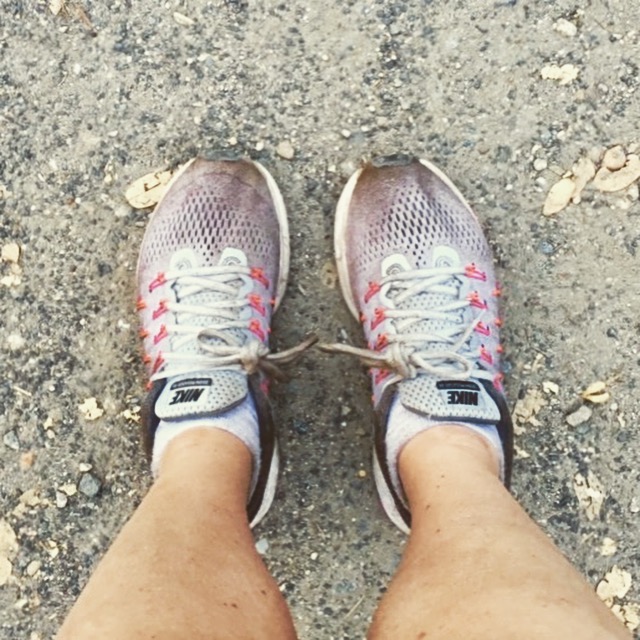 In the end, my Nikes got me there and back (thank goodness they’re washable), not a blister in sight: 9+ miles walked, more than 2000 feet elevation climbed, equivalent of about 120 flights of stairs pretty straight up, in about 4 hours (we stopped to smell the, uh, mist?). I think I need some hiking boots! 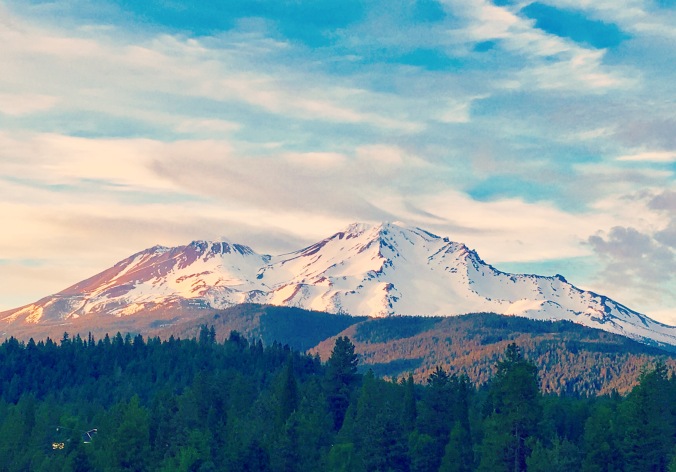 The next afternoon we headed back home by way of Crater Lake National Park in Oregon. This is Mount Shasta at dusk on Friday night.

Saturday we drove in to Crater Lake National Park at about noon. Part of the rim drive is not open yet for the season, so our trip was short and sweet. This is Crater Lake Lodge, built in 1915. It’s pretty cool. That is a pile of snow on the right in the photo.

You will always encounter a friendly begging chipmunk at Crater Lake. 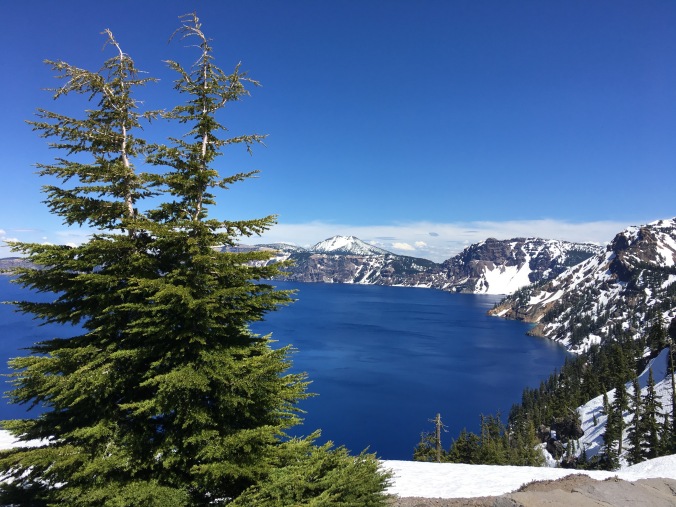 I have been to Crater Lake many times both as a child and as an adult. The Peacemaker hadn’t been there since he was two. It’s pretty amazing.

Crater Lake with Wizard Island on the left. These Crater Lake photos were not altered in any way. It is just that blue.

Honestly, we all had a blast. No drama, no triggers, just plain old family fun times. When we return, I will climb to the top of Upper Yosemite Falls. I’m looking forward to it.

12 thoughts on “Road trip to Yosemite”