Before we arrived Sydney, however, our cruise ship docked at Hobart, Tasmania. Again we had received recommendations from Ruby and had opted for the Tahune Forest Airwalk. Forests ended up being a theme for this trip. It was a beautiful day in Hobart as we hopped on a bus that would take us to the banks of the Huon River in the Huon Valley of southern Tasmania. We walked through the forest and then on the Airwalk itself, which is a steel walkway footbridge high up near the tops of the Eucalyptus trees.

The banks of the Huon River. Tasmania, Australia. 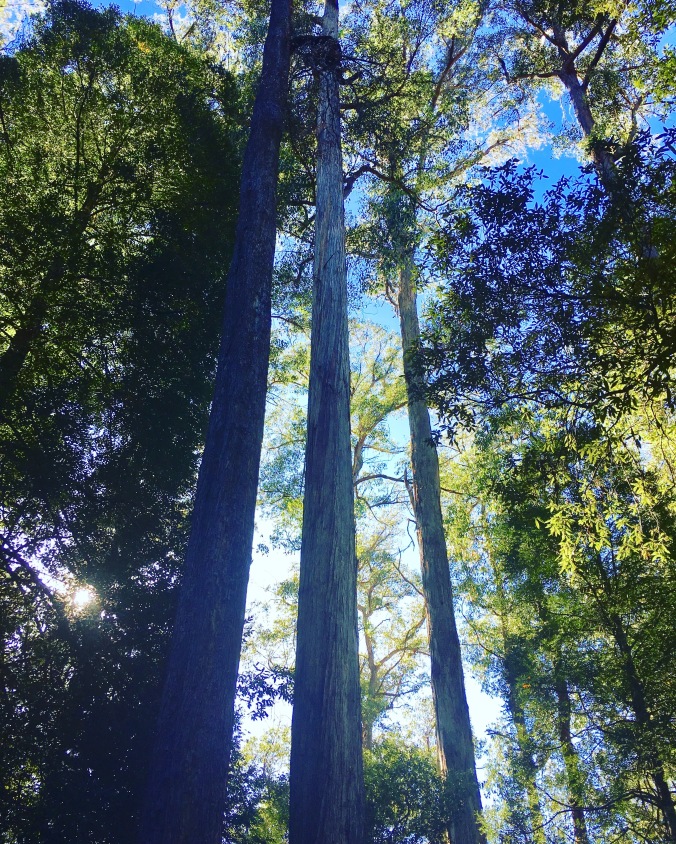 Interesting thing we learned while on our forest tour. We have actually seen 9 of the 10 tallest tree varieties in the world. The tallest variety is the Coast Redwood (Sequoia sempervirens, California). The second tallest tree is the Mountain Ash (Eucalyptus regnans, Tasmania), and third is the Coast Douglas-Fir found right here on the Oregon Coast. As far as numbers 4-10 are concerned, two are found in California (in locations we have been), and four in Tasmania. Number five is actually in Borneo, a place we have not been. Who knew that our trees out here on the west coast of the United States were THAT tall. Also, pretty sure I had no idea there were that many different varieties of Eucalyptus tree. Thank you Tasmania, Australia! 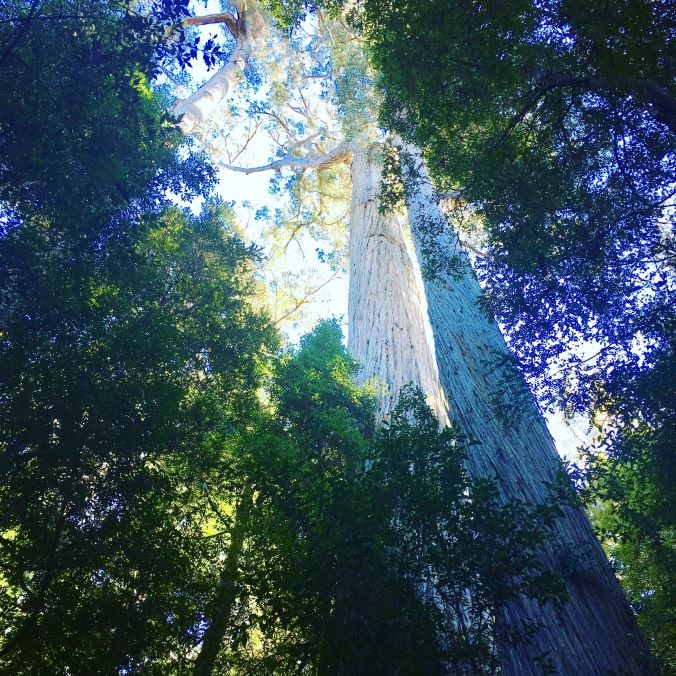 A look down at the forest from the Tahune Airwalk. 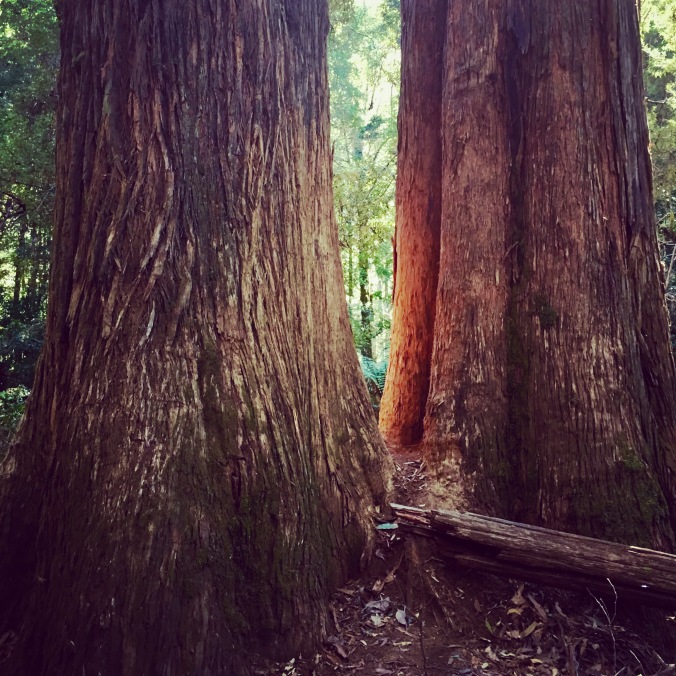 The massive trunks of King Stringy. 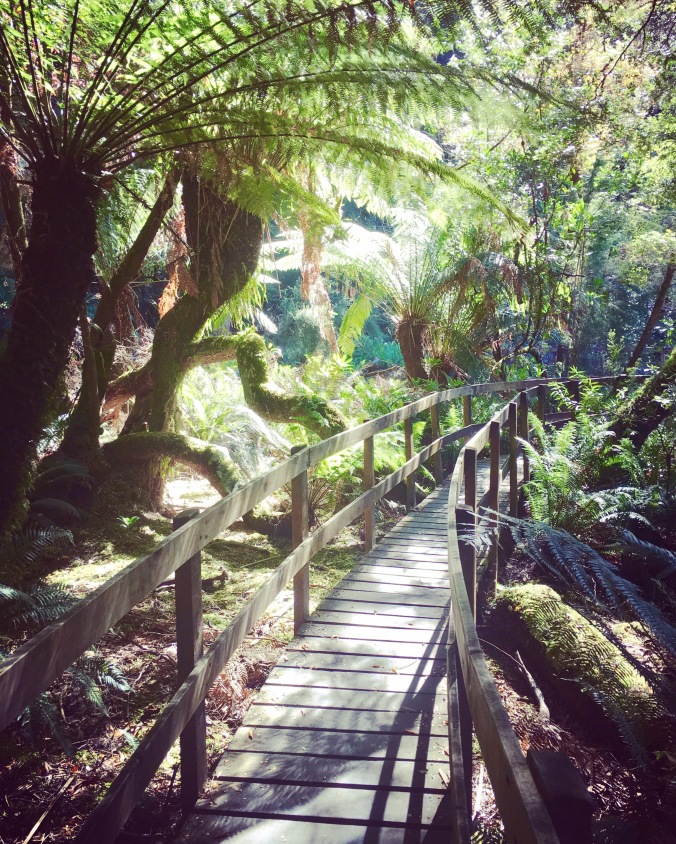 Back at the dock, I took one last photo of our ship. At this point we had a couple hours before leaving Hobart. After Hobart we had one more day at sea before we finally docked in Sydney.

Of course you might notice another running theme (besides my obsession with forests and trees)… PIZZA! This one was really nice. A brick oven 1/2 margherita, 1/2 Italian style.

Back on board the ship, we had chosen this particular evening for our special night together. Truth be told, we had chosen a couple other nights that frankly did not work out with the weather. Our spa suite included a private, romantic dinner on the spa deck. It was really wonderful. We had the entire deck to ourselves. During dinner, we had a designated chef/server. There was candlelight and Michael Buble in the background. The chef prepared our meal right there in front of us on a little hot stone grill. It was over the top decadent with lamb chops, filet mignon, chicken, fresh caught fish, and pork tenderloin. The dinner commenced with hors d’oeuvres. It started getting dark shortly after our arrival on the deck, so I only took a few pictures and then gave up and just enjoyed myself.  There was a whole platter of appetizers just for us, then a platter of antipasto, a tomato mozzarella salad, a huge green salad plus numerous grilled vegetables and potato varieties. It was seriously over the top. Dessert was something sinfully chocolate, plus a plate of chocolate covered strawberries, which we set aside for later. 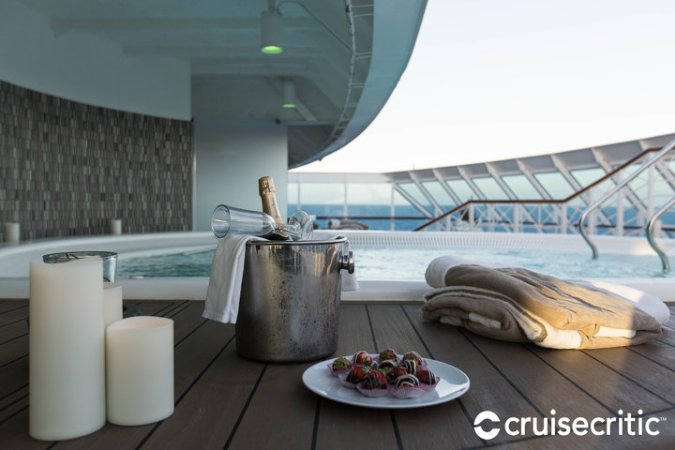 This is s stock photo, obviously, but it looked exactly like this on the night we left Tasmania. After dinner we did go in the huge spa tub. It was well past dark at that point.

We had our own bed made up for us on the deck in case we wanted to sleep outside. We opted to relax on the bed after the spa tub, and listen to the waves. We slept in our own room, but we sure did take those strawberries with us!

This was the gorgeous sunset as we sailed away from Hobart, Tasmania, Australia. 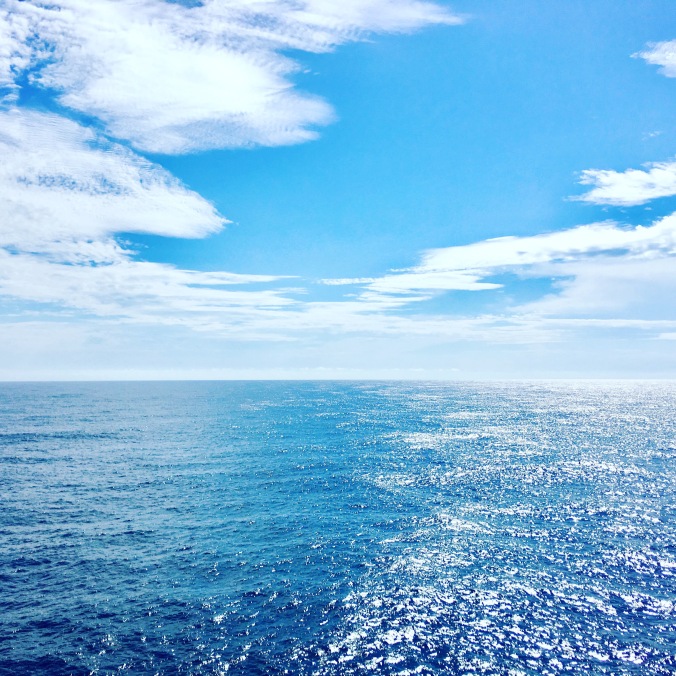 We had a beautiful day crossing over the Tasman Sea.

And then, we lost the pretty weather. As we arrived Sydney on a Tuesday morning, the clouds were upon us. Still, it was an absolutely gorgeous ride in through the Harbour.

The big Carnival ship that you can see above just past the Opera House ended up taking the main Harbour moorage spot. Our smaller ship was able to pass under the Harbour bridge and down to a smaller dock just past downtown Sydney.

Under the Sydney Harbour Bridge. 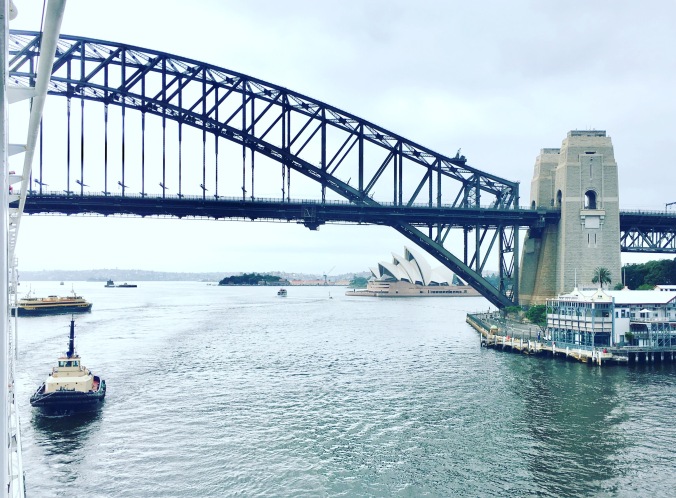 I took A LOT of pictures of that bridge and that opera house.

After proper docking, we disembarked the ship for our private afternoon excursion that would take us on a drive all around Sydney plus lunch at an exquisite spot across the Harbour. And blue skies came out for the occasion.

Another view of the Harbour Bridge, this time from the other side.

We started near Circular Quay, an area of the city originally built by convict labor. Today the main ferry terminal is there (and that Carnival Cruise Ship), plus lots of shopping, cafes and restaurants, street performers. Just generally a really fun place to hang out. We drove by and through many different neighborhoods like Darling Harbour (newer pedestrian area with museums, the Sea Life aquarium and lots of other fun spaces; I wish we could have spent some time there), downtown and the Sydney Tower, we stopped at Mrs. Macquarie’s Point, saw Nicole Kidman’s former residence at Darling Point overlooking Sydney Harbour (not too interested in Nicole Kidman or where she lived/s, but she’s a big deal in Australia). I thought the U.S. was bad about hounding celebrities… apparently Australia has a serious paparazzi problem as well. 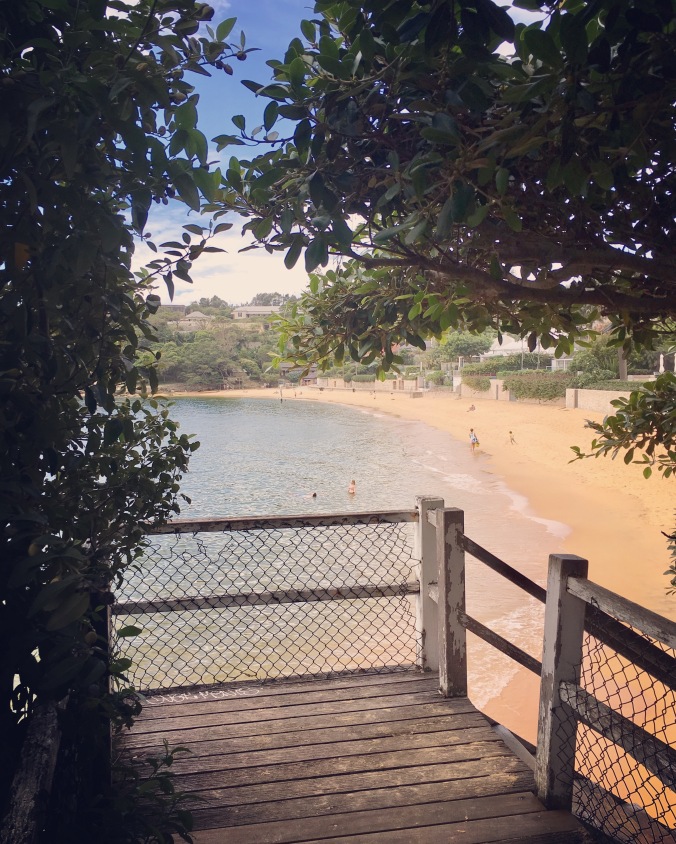 A stop in to a cozy little secluded beach near Watson’s Bay.

Our lunch destination: Gunners Barracks, Mosman. The building was originally used as barracks for artillery men operating a battery on Georges Head. Now it is a simply gorgeous place to have a meal, or afternoon tea. (or a wedding apparently)

Blue Eyes and I chose the Barramundi for lunch. Fantastic!

After lunch we continued driving around through the most expensive neighborhoods. It was nice, but I think our time could have been better spent learning a little bit more about the history of the city, and not learning so much about how expensive the residential real estate is…. and it is EXPENSIVE!

Toward the end of the tour, we drove by some famous beaches including Bondi Beach (pronounced Bond-Eye).

As we were heading back to the ship, it started raining pretty heavily with thunder and lightening. Great timing! We ate our last dinner on the ship, packed our things, and the next morning, we were off. 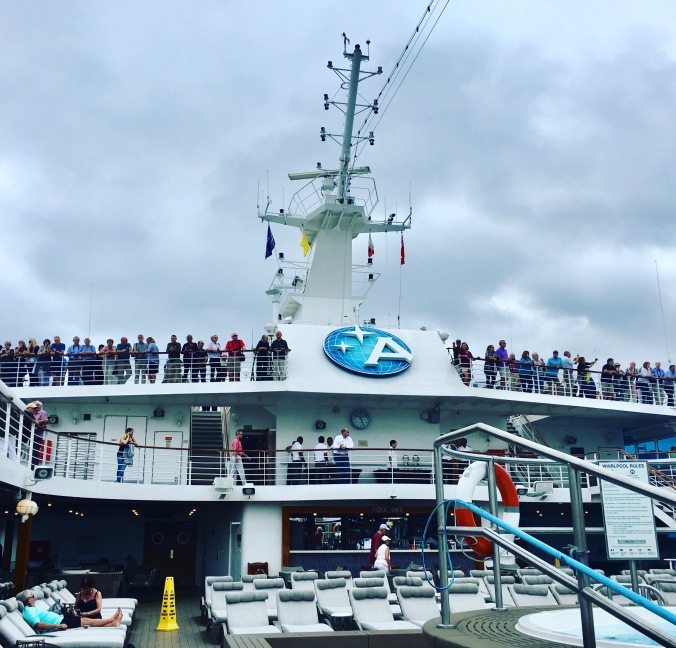 We were whisked away to our hotel accommodations for the last two nights of our stay in Sydney. We took it easy that day. Blue Eyes had work to do and preparation for a business meeting the next morning in Sydney. I relaxed and took in the view from our room. There was sunshine until that witching hour again, same as the day before, about 5:00pm, and then there was another electrical storm with pounding rain, thunder and lightening. We ate dinner at the hotel.

Out the window of our hotel room, The InterContinental, with views of the Royal Botanic Gardens, the Harbour Bridge (out of this shot to the left), the Sydney Opera House+++

The next morning I slept in while Blue Eyes went off to his meeting. I was trying to figure out what I really wanted to do for the afternoon as it would be our last opportunity to experience Sydney. Our travel agent had booked us a really fun evening with a semi-private tour of the Opera House, a three course dinner at Aria Restaurant, and then our very first Opera, La Traviata.

I had originally wanted to take the ferry from Circular Quay to Taronga Park Zoo. I’m not a huge fan of animals in zoos, but I was pretty excited to see all the Australian animals I haven’t seen before. But then I also wanted to do the Bondi to Coogee Coastal walk. I had heard about it before and then was reminded by an Instagram follower that I should not miss that walk. The weather was sort of cooperating, so I opted for the Beach Walk. SO GLAD I DID! OMG. So beautiful!

We started back at Bondi Beach. We were familiar with it from our tour a couple days before.

The walk is paved and very safe. This rock is just past Bondi. So interesting. 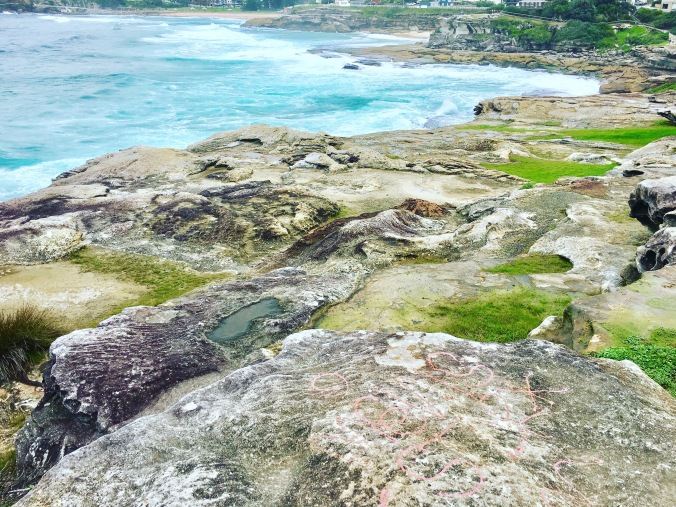 Honestly, the beauty was mesmerizing. 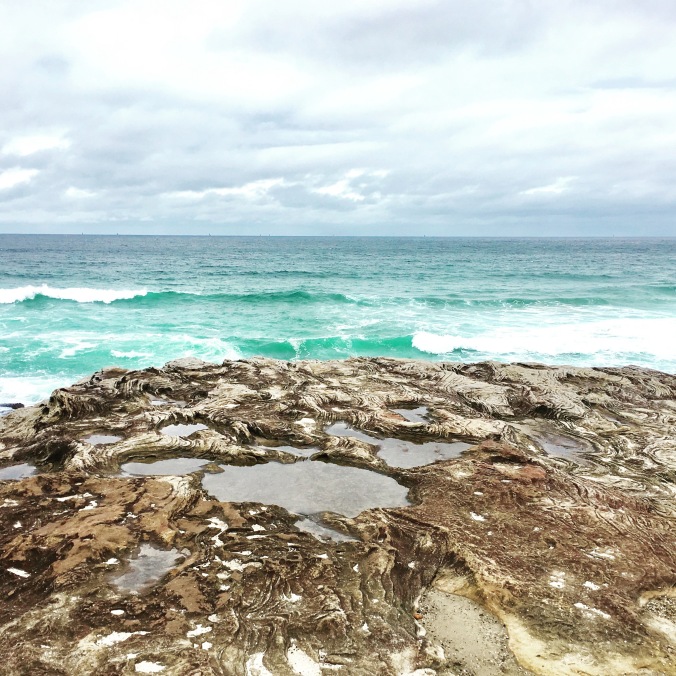 Tamarama Beach. Closed to swimming and surfing due to dangerous water, making it even more pristine and beautiful. 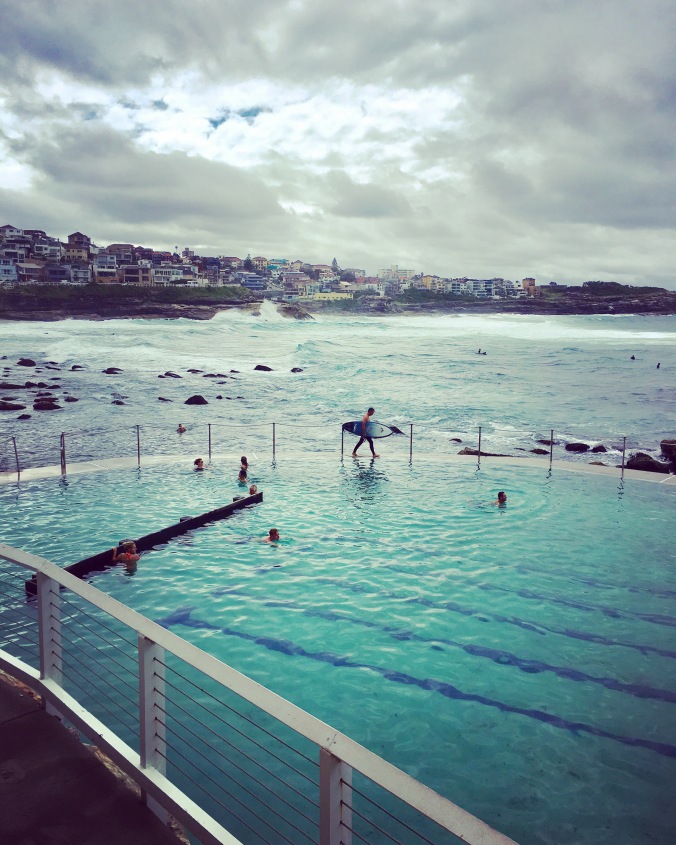 Bronte Beach Rock Pool. So gorgeous. The waves just spill in and out, in and out. 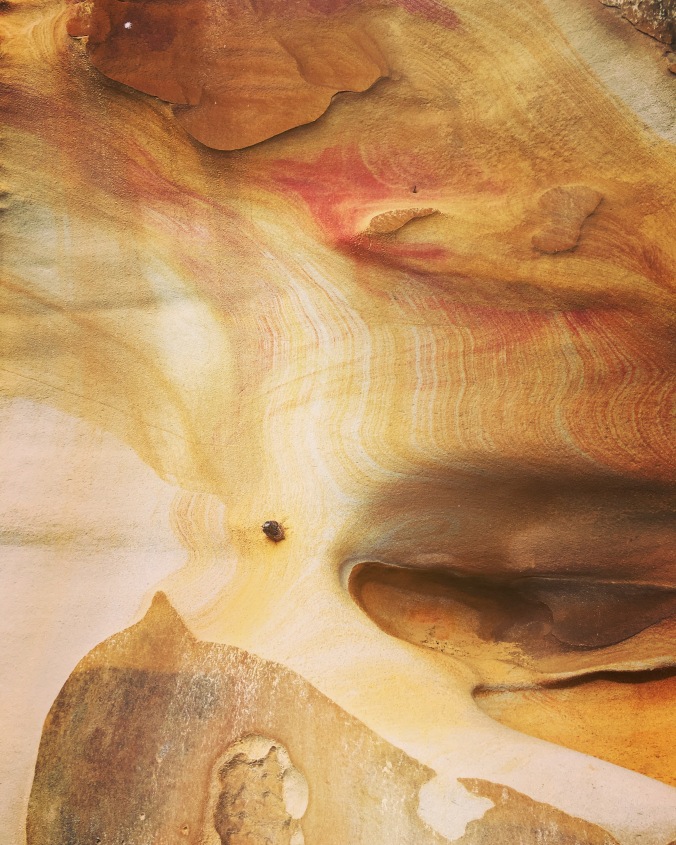 We encountered numerous older and very tan gentlemen just relaxing anywhere and everywhere. What an awesome place to read the paper. Bronte Beach. 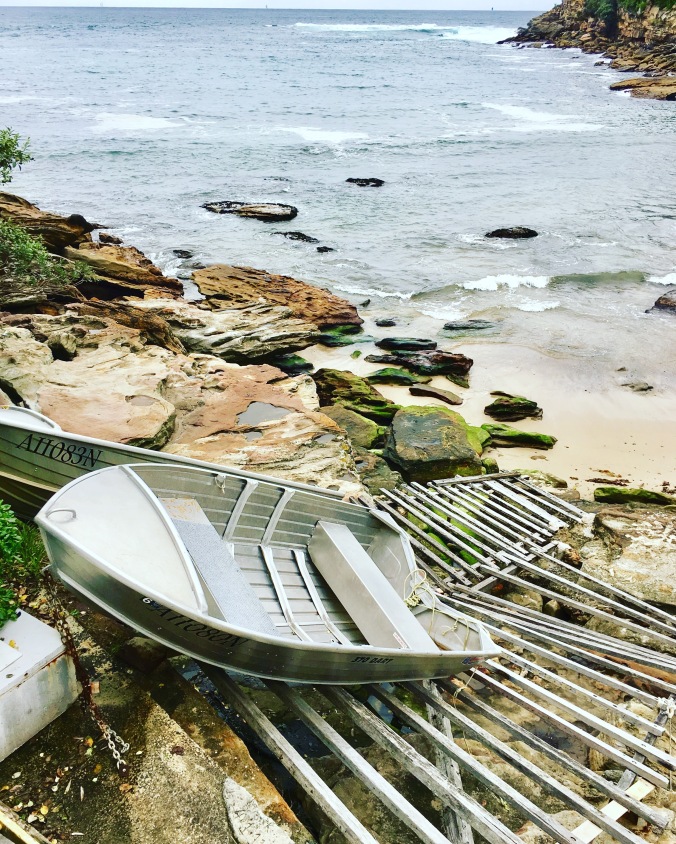 And finally, Coogee Beach. Just a quick, not very interesting pic because it was starting to rain, I had to go to the bathroom, and we were STARVING. 🙂

We hustled up the beach and to the nearest eatery we could find, Coogee Pavilion. At first I thought it would be uninteresting. I thought it was Cafeteria Style (it wasn’t) and it turned out to be a great place to stop for lunch.

Blue Eyes and I shared, as we often do. First, the Tomato, Watermelon, Burrata and Basil salad. So pretty and so good. 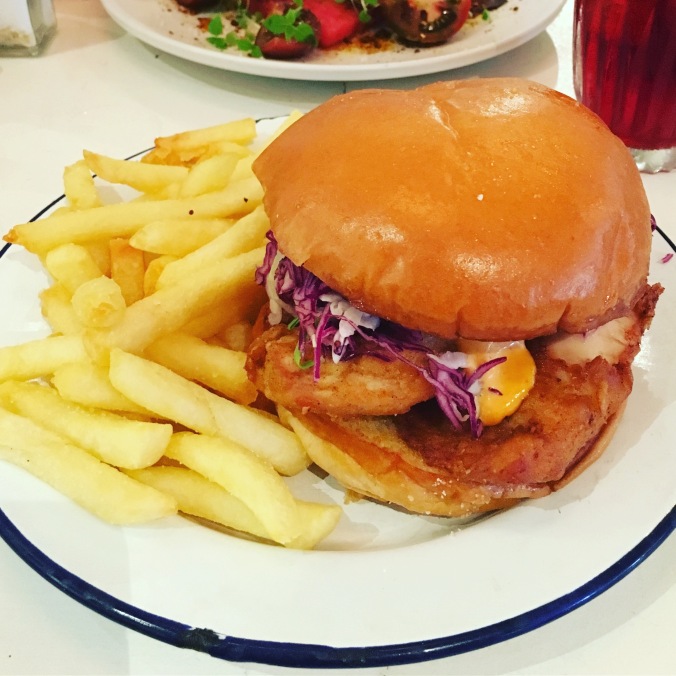 And then for a bit of a splurge, the fried chicken sandwich. Mmmm.

We grabbed an Uber back to our hotel room and had about 15 minutes to prepare for our fancy night at the opera. Yeah, we should have left more time, but we really did enjoy that Coastal Walk. And, although it was just a short walk to the Opera House, it was pouring down rain by this time, and I was wearing heels.

Despite my fussing and fretting, however, we made it to our tour on time. The tour was great. So much information about the original Danish architect of the building, Jorn Utson and the conflict swirling around him and the actual building of the Opera House as well as the uses of the Opera House. The building is really a Performance Venue with the largest space being a concert hall, and then including an opera house (Joan Sutherland Theatre) with other smaller theaters included as well as a recording studio. There are cafes, restaurants, bars, and retail outlets. I was surprised to hear of the variety of uses for this venue including lectures, classes, music “gigs,” and Children’s school performances.

When we first approached the Opera House on our cruise ship and viewed it from the Sydney Harbour, I was really confused. I always thought the Opera House was white. Turns out that the exterior is made of precast concrete and then covered in tiles in a chevron pattern. The tiles are glossy white and matte cream. Depending on sun, light etc., they appear white or cream. 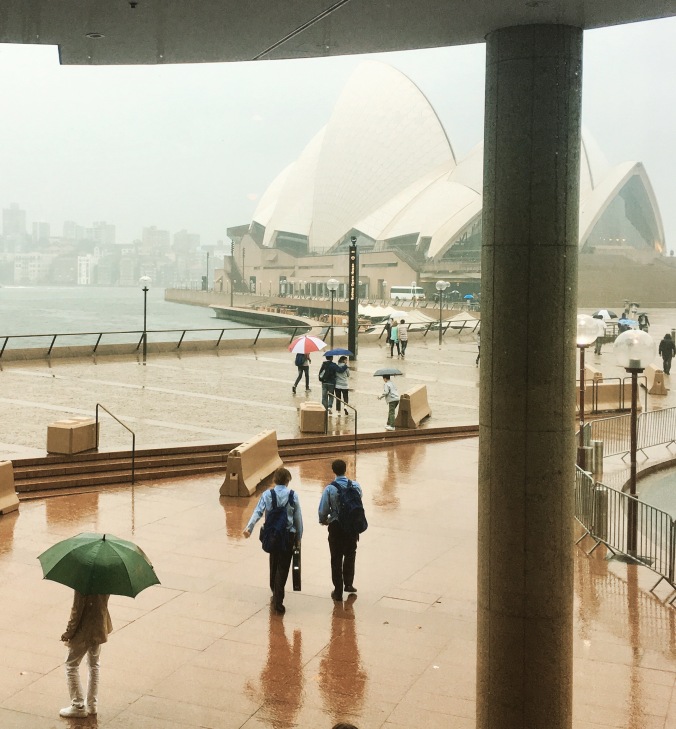 View of the Sydney Opera House from our dinner table at Aria Restaurant. 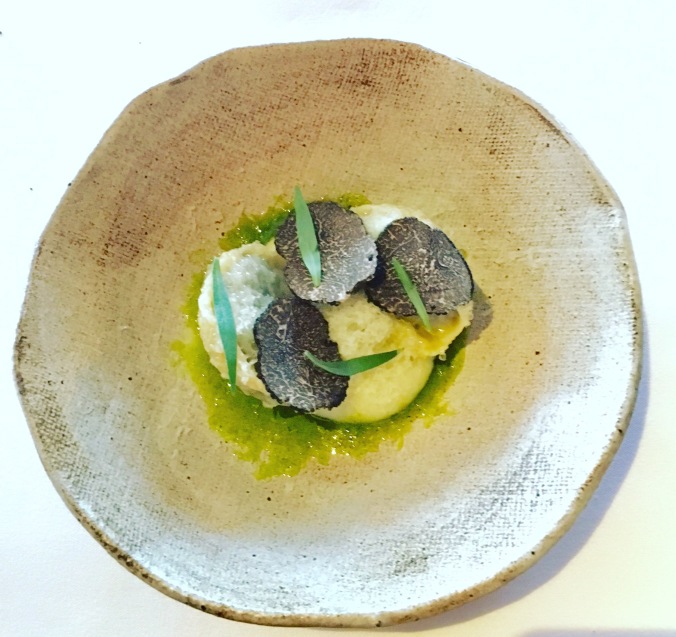 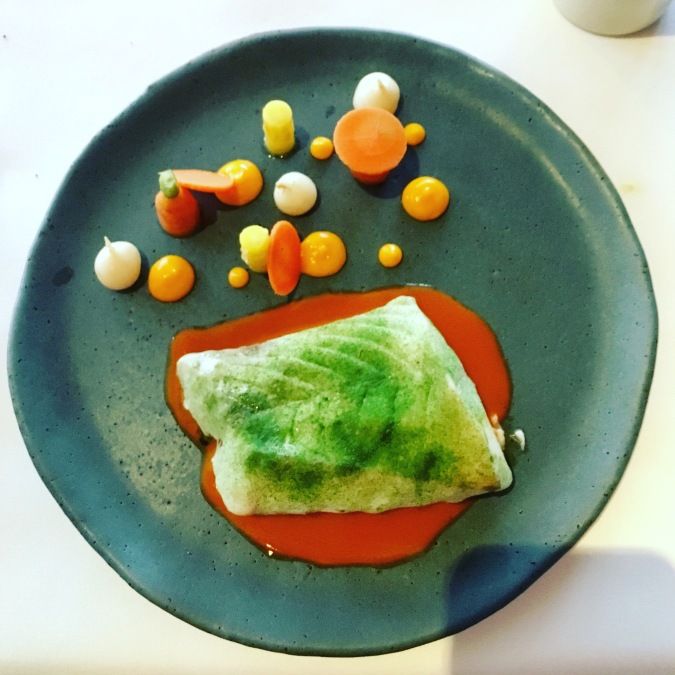 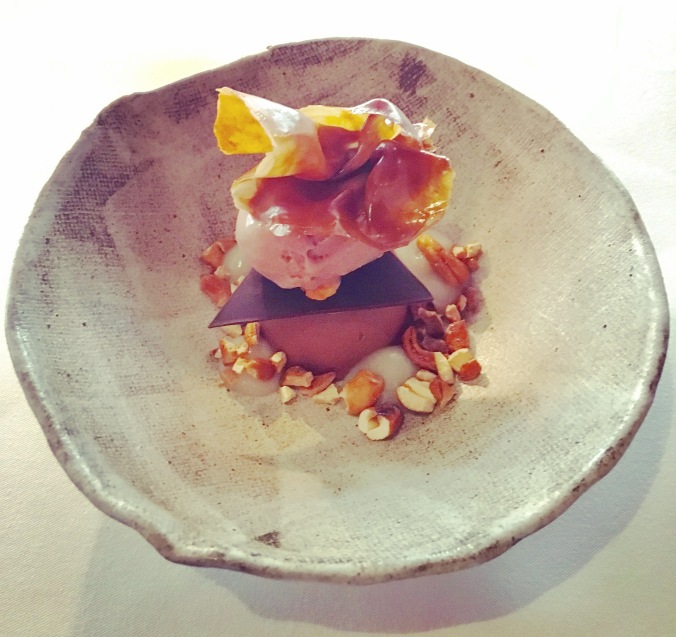 Cute young couple outside the Opera House with the Sydney Harbour Bridge and Luna Park in the background. I really wanted to switch shoes with her!

My last shot of the Sydney Opera House.

We enjoyed the opera although the tallest person in the Theatre was sitting in front of me. No kidding, when he stood up he was like seven feet tall. It was okay, I just had to lean a bit. As promised, La Traviata was full of fancy sets and lavish costumes. It was fun. I wouldn’t do it every week, but going to the opera could be nice every once in a while. We didn’t have enough time in Sydney to really get to know it, but we did okay.

The next morning we were off on a new adventure… in Melbourne!

5 thoughts on “Australia, week one: the big city”