I was about to publish this post, and noticed WordPress has wished me a Happy Anniversary. Four years ago today I started this blog. Welcome to post #446. Wow. A lot has happened. I am happy to be writing about something happy. Now, back to our regularly scheduled programming.

Technically Seattle is not my town, but I have been to Seattle literally dozens and dozens of times. Not to worry, later in this post, we do get back to Portland. Mine and Blue Eyes’ relationship with Seattle goes something like this: we have lots of business in Seattle, a big chunk of my family lives on the Olympic Peninsula side of Puget Sound and has for 25+ years, we don’t have professional football or baseball in Portland, but Seattle does–so we travel three hours north for some of our sports fixes, and I have been a tourist in Seattle many many times, but not for many years. TC was in charge.

Seattle Washington is a beautiful city. 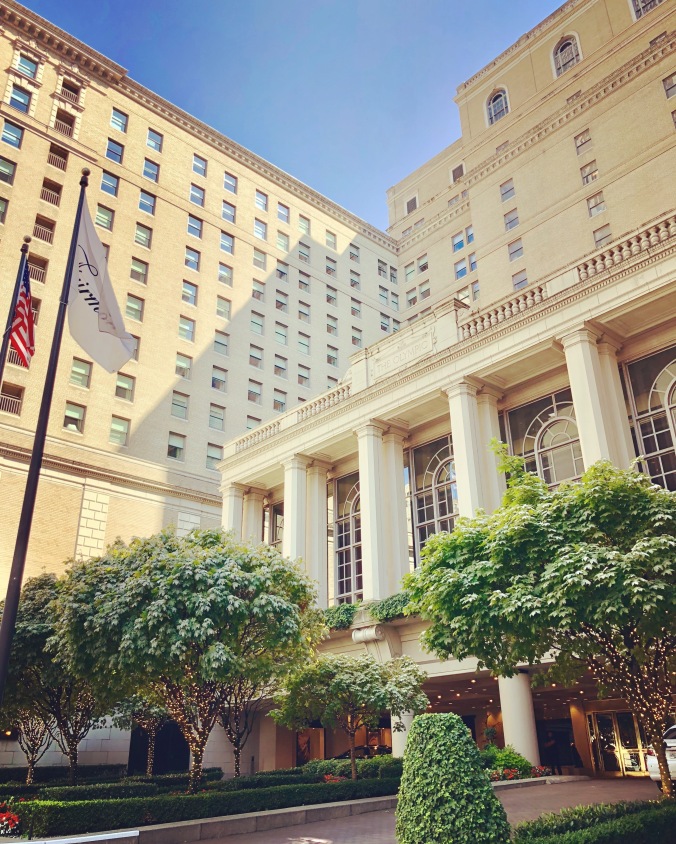 We stayed at The Fairmont Olympic Hotel, downtown Seattle Washington. It was lovely and well located.

Just off the lower lobby level of our hotel was a cute patisserie and coffee shop. We had tea and pastry there one morning.

A hidden gem: 4th Avenue Espresso Bar Pastry Case. I had the chocolate croissant, TC had the breakfast cake.

King Street Train Station: you know you’re in Seattle when, you walk out of the train station and not one, but two sports stadiums are within immediate view. No sports this trip though because TC does not “do” sports. 🙂 Fine by me. I am very versatile.

TC found the cutest place in the Pioneer Square area of South Seattle called The London Plane. The food was delicious, and there was SALAD! LOL. 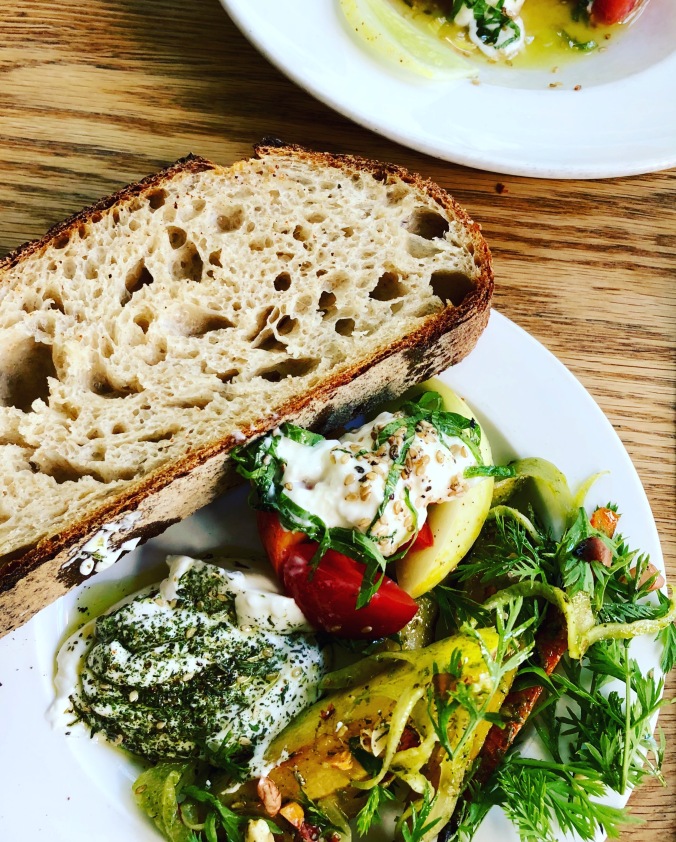 Of course there was cake too! Rose & Pistachio Cake

We spent some time at Pike Place Market, the original Starbucks Coffee Shop (yawn, boring), we had a decent grilled cheese sandwich at Beecher’s across from Pike Place along with a lot of other tourists, we window shopped the shops in the market, and the alleys across the street. I really think all tourists who visit Seattle go to Pike Place Market. It’s iconic. Once you’ve been there a few times though, it loses it’s appeal, I think. It’s crowded and cluttered and dusty (oh, my allergies). It was a beautiful day though and imperative that TC visit the market. So we did! Check!

We also scoured the streets for a particular piece of street art from her favorite artist. That reminds me how I totally forgot how STEEP some of the streets are in Seattle. Not like San Francisco, but steep enough. Exhausting!

On the second day we did something I had not done before and really wanted to do and that was visit the Chihuly Garden and Glass  permanent exhibit next to the space needle. We saw the space needle, but we didn’t go up in the space needle. I was secretly cheering inside when TC decided we didn’t need to go up. I have this fear of heights thing. It all worked out. 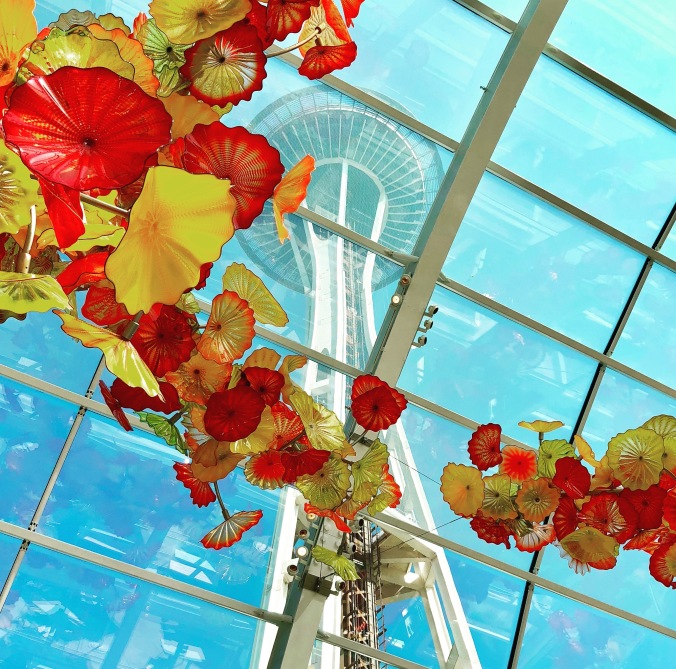 The glass pieces in this exhibit are simply awe inspiring, breath taking really. Dale Chihuly is a native of Tacoma, Washington just south of Seattle. Tacoma is where his museum is, which I have visited a couple times. The glass blowing exhibit at the Museum is really fun to watch. Chihuly’s original Pilchuck Glass School (still there offering tours & programs) is about 50 miles north of Seattle in Stanwood. When our children were young we vacationed on Camano Island, Washington and stumbled upon the Glass School before it was the phenomena it is today. Dale Chihuly is a true Washington State treasure. 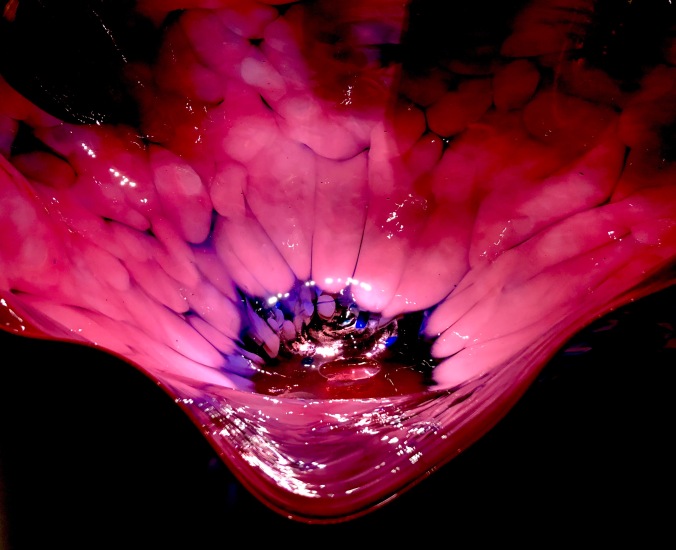 TC picked a delicious spot for dinner after our long day of sightseeing. Sitka and Spruce is a sister restaurant to The London Plane, and both share the same delicious Plane Bread, we both ordered a pretty tasty lamb dish, but Sitka and Spruce offered something extra special for dessert. It was so special we decided to eat it twice! I kid you not. Dinner one night, late afternoon snack the next day. 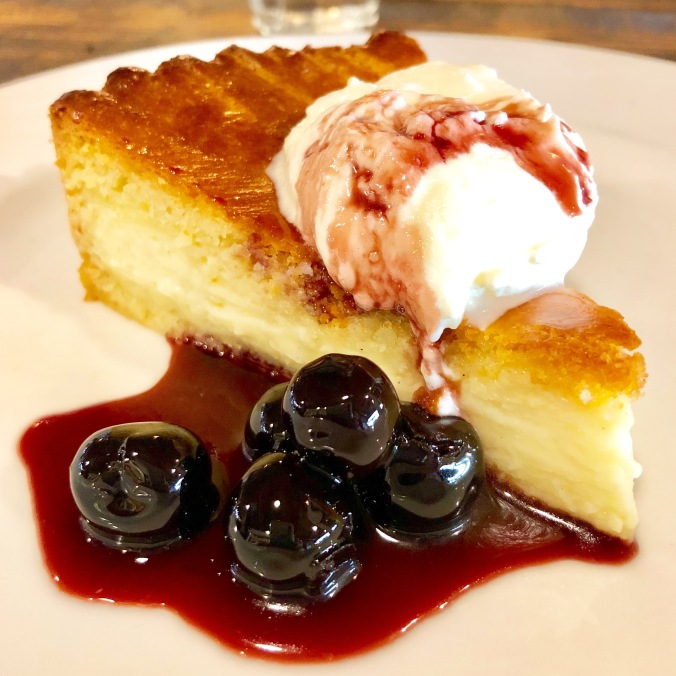 This dessert was so delicious I am definitely going to try and recreate it for an upcoming holiday, probably Christmas. Gateau Basque is a tart filled with pastry cream. The preserved cherries are insanely decadent. So good!

So the original Starbucks location is not interesting, but something we did stumble upon up by Sitka and Spruce was a Starbucks Reserve Roastery. 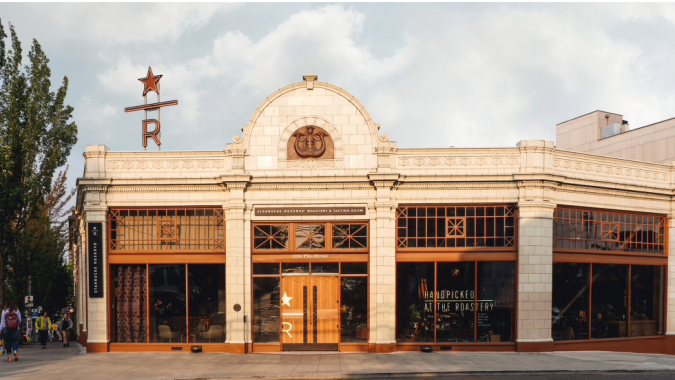 I don’t drink coffee and this place is a bit like Starbucks Disneyland, but what did light my fire was that they have a Princi Bakery right inside the Starbucks. O.M.GOODNESS!!! The quattro formaggio focaccia…. TO DIE FOR. Lots of ooey gooey cheese on buttery crispy bread. *(sigh)*

TC and I scarfed down our focaccia so quickly I didn’t get a photo, but this comes pretty close to representing the cheese-y, butter-y, bread deliciousness that is four cheese focaccia.

On our final morning in Seattle we explored the Capital Hill area of Seattle.  We headed there in search of Street Art (of course), but we also perused the old Elliot Bay Book Company bookstore. 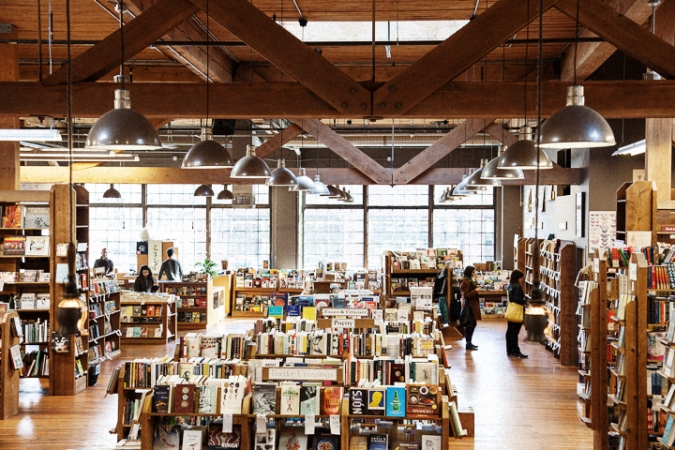 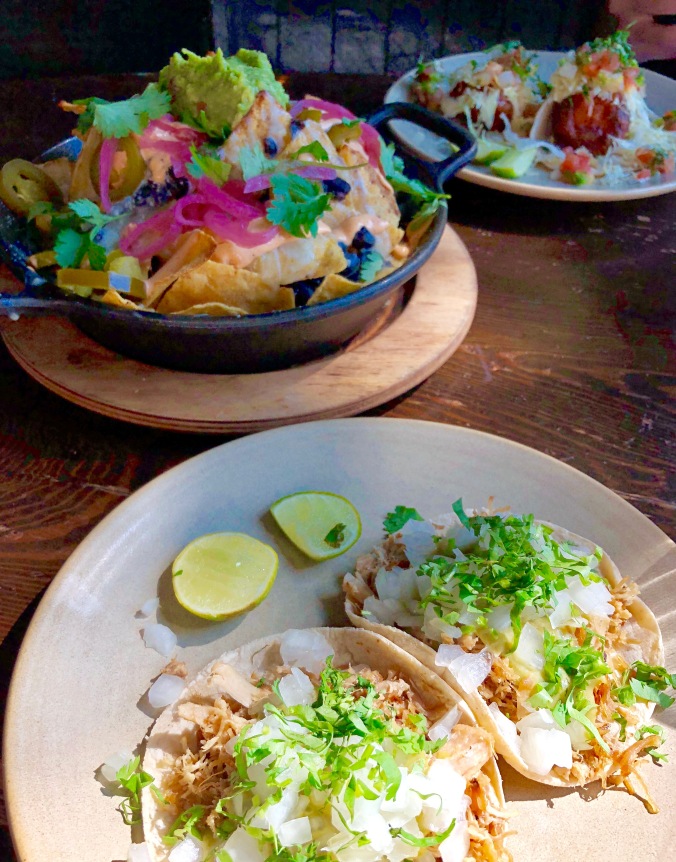 Mexican at Poquitos, Capitol Hill. The tacos were okay, but the nachos were really delicious. House chips cooked in rice oil, beans, pickled onion, pickled jalapeño, chipotle crema & guacamole smothered in an amazing and decadent cream sauce. I am not usually one for cheese sauce, but this one was so rich and tasty, reminiscent of a good homemade queso.

After indulging in our ice cream treat, we headed back to Portland because we had a dinner date with Blue Eyes and Trifecta Tavern’s Double Pimento Cheeseburger. 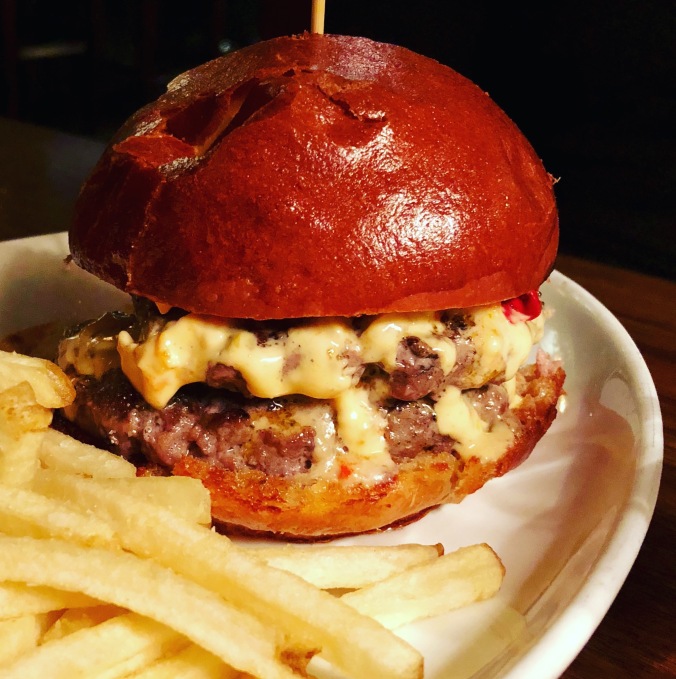 The richest burger I have ever eaten… buttered brioche bun, aioli, two grass fed patties both topped with Trifecta’s homemade pimento cheese. The fries are pretty good too!

And finally it was time to sleep it off because we had a busy day planned for Friday, TC’s last full day in the Pacific Northwest.

We started out with biscuits at a cute bakery I had been wanting to try but hadn’t been to yet. 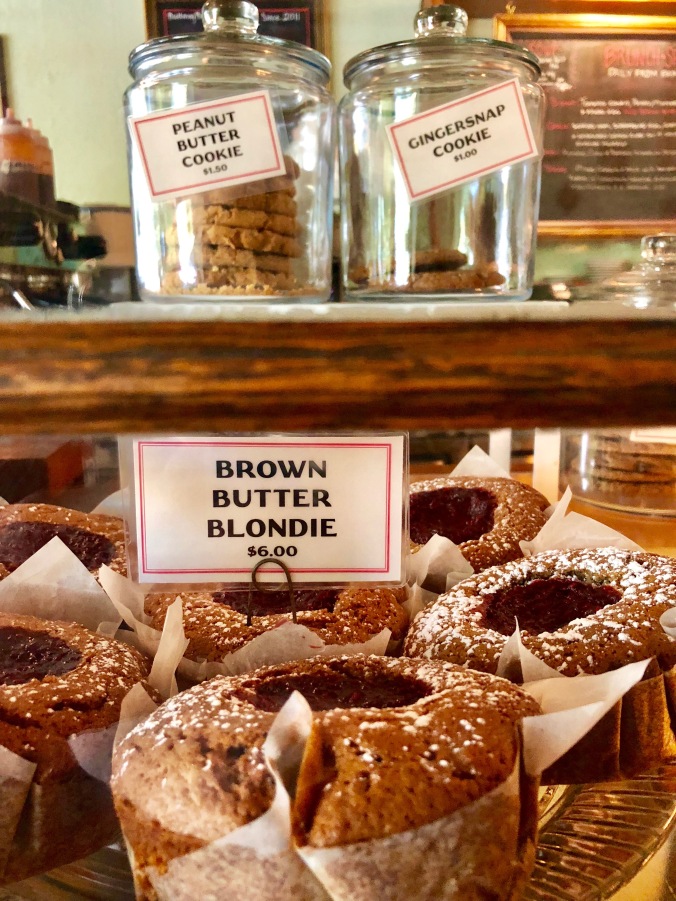 Filled with lots and lots of goodies.

Unfortunately the piece we wanted to see, Madame Butterfly, is placed on the top of a building and is really for private viewing only, but another of his pieces (very large) graces the side of the same building.

This is just the upper part of her. She is 70 feet high and her hair is made from live plants.

Because it was in the general vicinity and well, chocolate, we headed to a local chocolatier (we have a lot of them here in Portland), Alma Chocolate 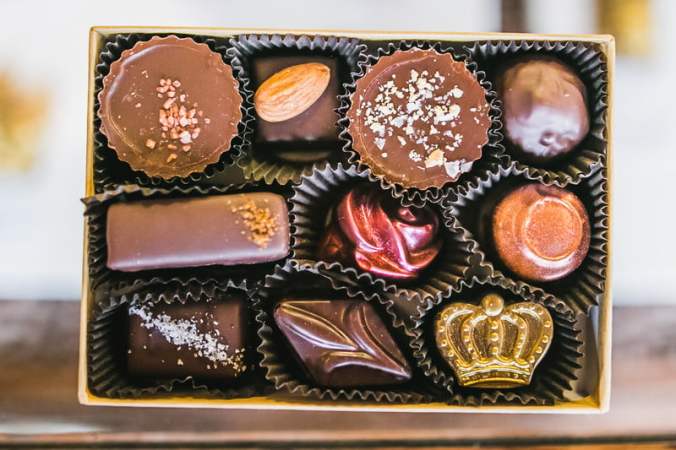 We enjoyed a cup of tea… and some chocolate.

On the way back to the car I was nudging TC towards eating a savory meal. I had wanted to try Bollywood Theater’s Indian Street food for quite some time. It seems TC had other ideas.

TC wanted to go back to Lauretta Jean’s (from breakfast) and have a piece of peach pie ala mode. Lauretta Jean’s is a pie shop after all. On the way to Lauretta Jean’s, however, we walked right past Salt & Straw Ice Cream and she just couldn’t leave Portland without having another scoop of Honey Lavender Ice Cream. So yes, TC had ice cream and then she had, ice cream. Gotta love that skinny skinny girl. 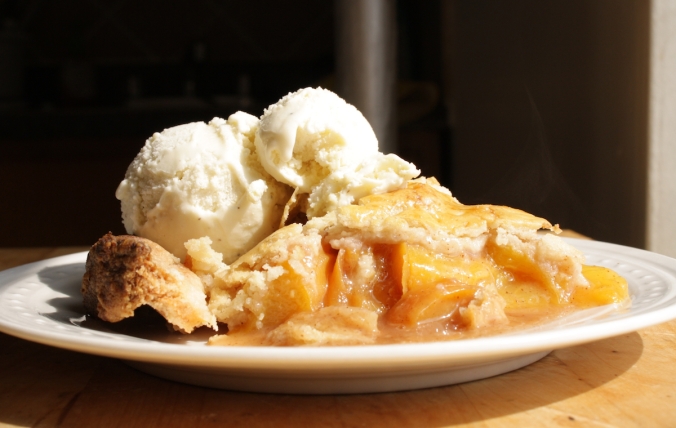 Dinner was a bit of a celebration as our older son was in town and we were celebrating his 27th birthday. TC joined us at Little Bird Bistro

Saturday morning before dropping TC at the airport, we ventured over to Powell’s Books

Powell’s City of Books is one of those must see tourist spots in Portland. This bookstore “claims to be the largest independent new and used bookstore in the world… and has nine color-coded rooms and over 3,500 different sections.” (wikipedia). It’s HUGE. It also has my favorite coffee shop inside (World Cup) that has my all time favorite hot chocolate AND you can take books into the coffee shop and just browse as many and as much as you like. It’s a nice rainy day afternoon activity.

After Powell’s we finally made it to Maurice, a modern pastry luncheonette in downtown Portland listed as one of the Top 10 Best New Restaurants in America 2014. The story of the chef owner on their website is quite interesting. The place is pretty small, but well worth the re-visit. The owner seemed a little less than friendly on the day we were there, but it didn’t matter because the food was amazing.

The lemon souffle cake was absolute perfection. The black pepper cheesecake was divine. Blue Eyes had a nice seasonal quiche with a side salad that offered something a bit savory, TC had a scone, I ordered something chocolate. We split everything. I want to go back, like, yesterday.

After all that, we headed to the airport to drop TC for her flight back home. We were all totally satiated and all proclaimed we would be dieting for the foreseeable future. I think TC was ready to head for home, but since she was only able to try about 1/2 a percent of the deliciousness that is Portland, I’m thinking she will return some day.

For lunch, I talked Blue Eyes into taking me to Bollywood Theater for some Indian Street Food. I had been craving it ever since TC and I had walked by the place the day before. And… it was so good.

We ordered a bunch of items, but since this post is already so full of photos of food, I’ll just post this one last photo of the Beef Kati Roll. As good as it looks!!! 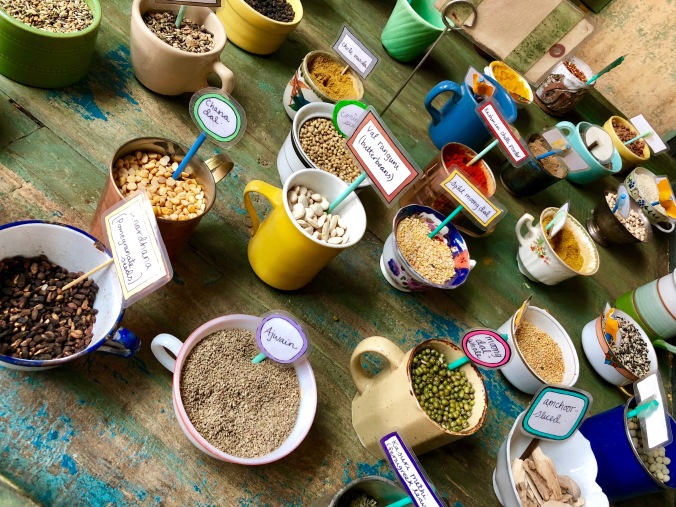 So, that’s mine and TC’s week in Portland (and surrounds), and Seattle. For every restaurant we ate at, there are probably 100 more worth trying. So much food, so little time!