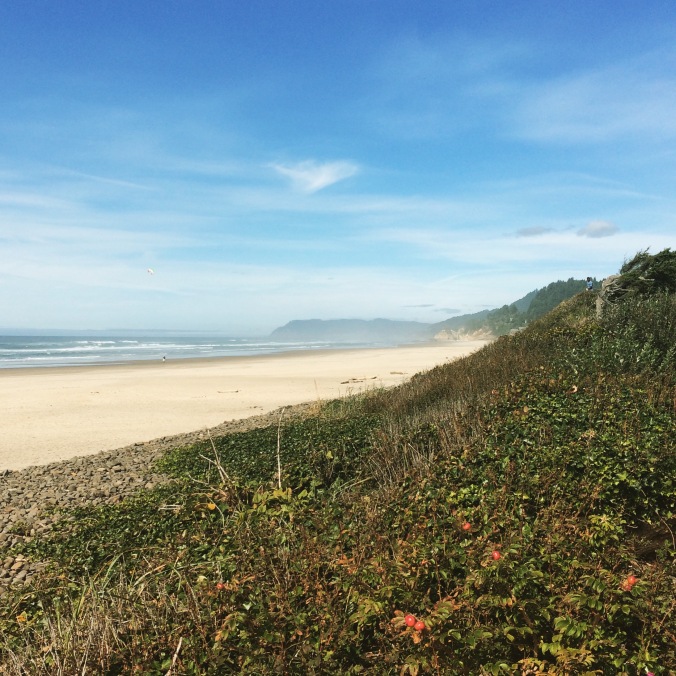 Life has been moving right along, no real problems, no real worries. We finally closed financing on our beach house. We broke ground and took a quick drive over to the property to watch the first anchors and pilings going in for the foundation.

A round trip drive to the coast means a little less than three hours in the car. We left after Blue Eyes’ therapy appointment. During the first part of the drive, Blue Eyes was talking about the latest assignment given to him by The Shrink. He is supposed to think back over the years, from childhood forward, about his illnesses, how they made him feel and also who he blamed for being sick. What a strange assignment in my opinion. I realize it was a loaded question, but I asked Blue Eyes whether he blamed anyone for his illnesses. His first and immediate response was “yes, I blame my parents for bringing me up in such an unhealthy environment.” And my response was, “really? REALLY? I mean sure, NOW at 50+ years old you are aware that you were brought up by shitty parents in a narcissistic and abusive household. You now know that you were incredibly vulnerable to being treated like crap and constantly belittled and you never felt good enough, nothing you did was ever going to please those people, but what good is asking you to verbalize who you blame now that you realize you were irreparably damaged by a couple of horrible people. When you were a child, and you were sick and cramping and constantly in the bathroom vomiting up blood, did you think, gee I have stress induced immune deficiency illnesses because I have shitty parents? When you were bedridden in college due to severe juvenile rheumatoid arthritis, even as your mother was calling and harassing you and telling you how horrible I was, did you blame her for your being sick? I think not. Because if you did realize how horrible your parents were, why would you stay in contact with them? When you were done with Law School and out from under their financial fist, why not put proper distance between yourself and the hate?”

I could tell I was losing it. I was choking back those familiar tears. I want my husband to stay in the present. I want him to live squarely in his current predicament. I want him to continue to take responsibility for who he is right now and what he is doing to repair his life. I also am not someone who lives in the past. I want to move forward. I said to him, “if you knew your parents were so awful, why did you talk so much about how loving and caring and close your family is? Why did you convince me to visit them? Why when they were so horribly mean to me, didn’t you help protect me?” Tears rolled down my face in the car as I realized once again just how confused I was. I did nothing wrong and yet these people were monsters. It made me question myself. As a 21 year old, I questioned how these wealthy successful adults could make me out to be the bad guy. Even I didn’t understand at the time fully what they were doing and why. From day one, they tried to break down who I was. They tried to change my reality and make me feel bad about myself. I spent years fighting off their evil. I spent years trying to defend my family. If Blue Eyes knew they were horrible and blamed them for his illnesses, why would he expose other innocent people to them. The answer, he wouldn’t. He didn’t know what had been perpetrated on him. He was a victim too.

But now, Blue Eyes is the perpetrator. Not just now, but for the past 30 years. I want him to stay present. Of course I am not a psychologist, but I am Blue Eyes’ partner and I know what I require to try and build back what I thought I had, a loving, honest and mindful marriage. As we were driving home, Blue Eyes was talking about the upcoming retreat he is planning with his sales team. The retreat will be presided over by an ordained dharma teacher, a disciple of Buddhist master Thich Nhat Hanh. This dharma teacher is a man Blue Eyes met at his last mindfulness retreat. It was spiritual love at first sight, or more accurately, Blue Eyes fell in love with what the teacher was saying. His words resonated. At the time, the teacher asked Blue Eyes what had brought him to Buddhist meditation. Blue Eyes was vague and not ready to open up about his addiction. We talked about it at the time.

As we were driving home from the beach, I asked Blue Eyes if he had since confided to the teacher about his sex addiction. Without hesitation, Blue Eyes said he had. Although I am happy that Blue Eyes was completely honest in his response, I am sad that he has so quickly forgotten the boundaries we have set up for me, for my feelings of safety. For Pete’s sake, Blue Eyes is reading the guy’s book right now and it is all about growing mindful relationships. It is a “rule” if you will, that Blue Eyes will not divulge his addiction to anyone outside his 12 step group without discussing it with me first. What Blue Eyes has done, who he is, affects me and my life. The last time he shared without thinking about me, without thinking about the consequences to me and without thinking about my wishes, was a few months ago and documented in this entry: Sex IS optional, part two.

What happens when Blue Eyes breaks the rules? He breaks my heart, again. When he completely forgets about me and my needs, he perpetrates the trauma, all over again. He makes me feel useless, not worth thinking about, not worth respecting. My needs are unimportant. Blue Eyes was looking for validation from the teacher, validation that his seeking out Buddhist practices of mindfulness and meditation was something worth congratulating him for. He wanted the teacher to say “good boy, Blue Eyes.” The truth is, his seeking Buddhist meditation as a form of connecting with his inner spirituality IS a good thing… I have written about it numerous times on this blog, I believe in it. But, his asking for validation for what he is doing is not a good thing. It is part of his old way of thinking and behaving. In the process of seeking selfish validation for himself, he ignored me and my needs. He may as well have been across town having sex with a free whore. I know to some that sounds harsh and unreasonable, but to me, it feels the same. It was never about the sex, it was about being completely self absorbed and doing anything he wanted to validate himself and his broken ways of thinking and behaving.

I realize healing from betrayal and recovering from sex addiction take a long time, and we are all incredibly fallible, but those realizations do not negate the fact that his breaking the rules really hurts. His forgetting about my feelings, needs, wants, wishes, boundaries, it really, really hurts.

26 thoughts on “What happens when they break the rules”