Beautiful snow day. It was great until mother nature dropped a bunch of freezing rain on top of it. Still pretty though.

I am a sucker for cinnamon rolls. I adore them. I crave them. After making three meals a day for days, the Peacemaker and I decided we were going to be lazy one night and order in dinner from one of those delivery places. Apparently they do that kind of thing here too, not just in the big fancy places like New York City. Who knew?

As I was perusing the possibilities, I noticed Cinnabon was on the list… what? Who would order Cinnabon cinnamon rolls for delivery? How crazy, and decadent, and strange. We did not order cinnamon rolls for dinner, but just saying “cinnamon rolls” was enough to put sweet, fluffy, cinnamon-y fantasies into our heads. We ordered Italian food, which I regretted about an hour after eating. Later that evening, Blue Eyes said the magic words, “gee, cinnamon rolls sound really good right about now.” I jumped all over that. A few years back, before being diagnosed as a sugar-aholic, I mean diabetic, I launched this really bad habit of making batch after batch of Alton Brown’s Overnight Cinnamon Rolls. They are delicious and addicting and take FOREVER to make. Later I found this recipe The World’s Easiest Cinnamon Rolls on Minimalist Baker’s blog. It is much simpler and the rolls taste nearly as good.

The recipe is actually vegan, but I did not have the requisite almond milk and vegan “butter,” so I just made them non-vegan. There is maybe a minute of kneading required, and they only rise once for an hour, so request by Blue Eyes to Blue Eyes stuffing his face with ooey gooey cinnamon sugar delights, took less than two hours. Next time I make them, I would up the cinnamon (they needed a little more cinnamon for me to be honest), and use brown sugar (Alton does). They were delicious!

Normally I wouldn’t have posted this. I made them two nights ago, they are a somewhat distant memory, but then I read Not Hate’s post, and she mentions cinnamon rolls, and then owlieme’s entertaining post today Habitually resolute. that is sort of about life and sort of about resolutions (of which I have none, especially not to give up cinnamon rolls) and since I don’t drink alcohol much anymore, I just felt like posting about cinnamon rolls, and mentioning how much I enjoyed owlieme’s post. 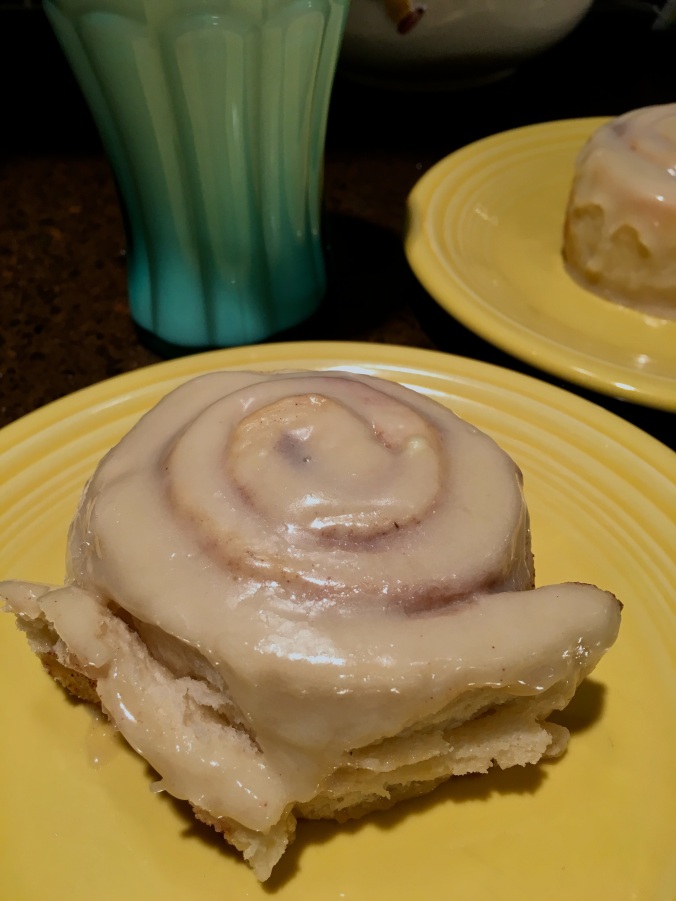 And in other news: Blue Eyes is done with his walker, the swelling has almost completely gone away, bruising is fading (finally), and he actually went downstairs and made me breakfast this morning… not even two weeks post surgery. Things are looking up!

Disclaimer: of course I have healthy goals. They are with me every day, not just once a year and they include eating well and exercising most of the time.

18 thoughts on “Did someone say Cinnamon Rolls”