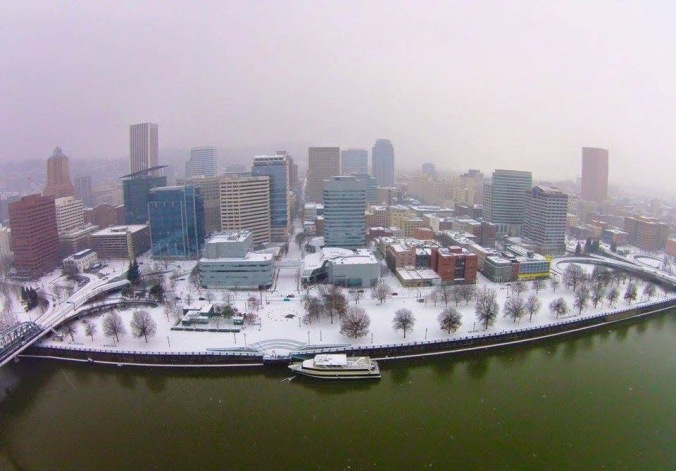 Before going to sleep on Saturday eve, Blue Eyes and I checked the weather for both home and the beach property. We are thinking of taking a drive soon to view the progress on the house foundation. I didn’t think Blue Eyes was quite ready for the drive on Sunday, so I was mainly looking to later the following week. On the weather app, it showed no precipitation in the forecast for nine days, and indeed showed sunny blue skies and freezing cold temps for Sunday. This, at approximately midnight, on Saturday night.

We live on a hillside above a moderately busy street and above a very busy freeway, just a hop, skip, and a jump from downtown. Unfortunately, we can hear some street noise from inside our house. The cost of having this particular view of a large meandering river, and beautiful mountain range with a majestic 11,000+ foot tall peak, so close to downtown is, what some might call, the constant sonance of a large waterfall just outside our window. It’s a nice euphemism for what really is a constant drone of cars traveling by just a couple football fields away from our home at speeds generally in excess of 60mph. We have learned to deal with the noise.

When I woke at about 8:30am on Sunday morning, the first thing I noticed was silence. When the house is quiet and our draperies drawn, the sound of the freeway from inside the house is slight, but there. Sunday mornings are quieter than most, but there is always some noise, except when there isn’t. The first time I experienced this silence, it was eery. I thought, what, has the world come to an end? How could there not be anyone on the freeway? Just like that first time, many years ago, I opened the draperies to find a winter wonderland spread out before me. There were a trickle of vehicles passing by, at a snail’s pace and causing virtually no sound from this distance.

I am constantly amazed by the inaccuracy of weather forecasts for our area. Snow was falling and continued to until noon. By about 3:00pm, the freezing rain commenced. The city was basically shuttered, all non-critical activities cancelled including Blue Eyes’ Buddhist Sangha. Last night would have been his first meeting back since his surgery. He was really looking forward to it. While I was upstairs doing my thing, completely unaware of what Blue Eyes and The Peacemaker were doing, but basking in my time alone, they decided to practice their own mindfulness meditation.

As part of the Buddhist tradition, cultivating mindfulness can be key to overcoming suffering and recognizing natural wisdom and The Peacemaker has embraced this concept with his father. They practiced sitting meditation, they chose some readings from Blue Eyes’ Buddhist materials, and they added walking meditation as well.

Even though I had no idea what they had been up to, when Blue Eyes and The Peacemaker eventually joined me upstairs they both seemed so happy and calm, and even connected. We watched a funny sitcom together and we all laughed and I have not seen them both so relaxed in a very long time. Each day is part of a long journey, and each day we make choices about how we travel that journey. What is the lesson I have learned today from living with a recovering addict? It is never too late to make good choices.

11 thoughts on “It warms my heart”