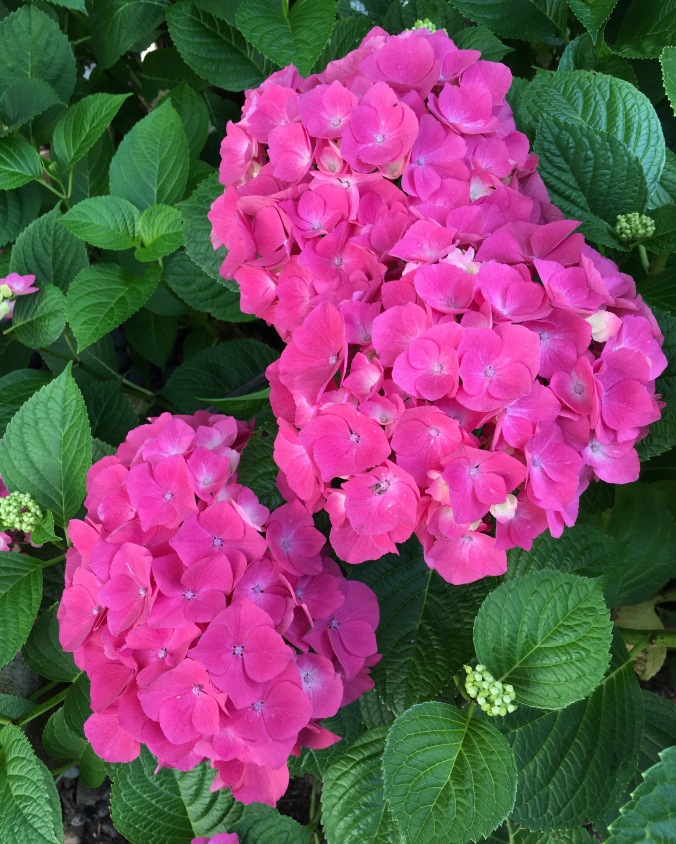 Hydrangeas from our front garden. So early. Usually we don’t have this loveliness until July. No filter, they are just that pretty in pink!

I am joining in on Totally Caroline’s 100 Things I Love. After reading Owlie’s List, I realized I need to do one before I can no longer distinguish my list from everyone else’s. I was thinking I could very easily do a list of 100 Places I Love and 100 Things I Love to Eat. So, you know me. Crazy Kat never runs out of things to say (a.k.a. never shuts up) and I do happen to love A LOT of things! What can I say, I’m a loving kind of girl.

I would have posted sooner, but, well, Father’s Day wore me out! We had a barbecue at our house yesterday and I really needed to clean up my flower beds, pots, deck, etc… I planted about 12 flats of flowers in all. It was a great feeling getting all of that done, but my back is paying the price. Blue Eyes was a super star, helping with everything, bringing out the speaker and playing beach boys music to keep me going, and sweeping up after me. He also barbecued two pork tenderloins and a dozen steaks. My parents brought shrimp skewers, I made an Asian Noodle Salad, and a German Potato Salad. No one went hungry, that’s for sure.

All in all, Blue Eyes is a great Dad. He was active in our boys’ lives from day one. Our older son had colic and Blue Eyes would carry him around in the front carrier for hours. He got up with them at night, because this girl needs her sleep. He changed diapers, he read to them, he sang to them, he listened to NPR with them!!! I know. While I was playing him Raffi, Blue Eyes was talking real life with a two year old. The Pragmatist was quoting NPR at three years old! As I said before, Blue Eyes introduced them to Batman and Sci-fi and coached their sports teams, and he did the best he could with what he had and it was pretty good. We all would have liked him around more, but we cannot go backward. Only forward.

But, the real joy of Father’s Day for me, was spending time with my step-dad. He’s the one with prostate cancer, in his spine, and he is such an amazing guy. He is doing so well considering he has no idea how long he has or what the future entails for him. As I say, he’s the healthiest sick person we know. I am grateful for the day he married my mother and I am so lucky to call him Dad. His son was here too, Peter. Peter was diagnosed with Leukemia a year and a half ago and had a bone marrow transplant last Spring. He has all kinds of side effects (mostly skin and eye problems) and currently takes 17 medications, but he is with us and he is grateful. We all are. It was a wonderful Father’s Day celebration.

I’m just going to spill now… the lists are in no particular order, just how they flowed out of my head… it was all fun, but the food and travel ones, super super easy.