We did it! We spent Thanksgiving at our new beach house. The experience had its ups and downs. Pluses and minuses, if you will, but what cannot be denied is that both Blue Eyes and I were blown away by our new house… and actually there was a huge storm at the coast the night before Thanksgiving and we thought perhaps the windows might also be blown away. I have never seen so much movement in a piece of glass before. This is a discussion we will be having with the architect because the west coast can get quite stormy. We’ll be discussing that and the fact that noise from the rain and wind that came through the big hollow opening that houses the mechanics and venting system for the two gas fireplaces made it sound like we were out on a rickety old boat in the middle of the ocean during a Nor’easter. Okay, maybe that is a bit of an exaggeration. And of course the house itself didn’t move one tiny little bit because the foundation is made of solid concrete drilled many feet below ground and reinforced with a dozen or so monstrous five foot square pillars below the actual floor. It is SOLID! But still, Lily the golden retriever was beside herself as she paced the floor and whined, ALL.NIGHT.LONG!

After the stormy night, this is what our big golden girl did all Thanksgiving day while we prepared dinner. I really do wish I had been the one lying there with her.

There was also the case that the building foreman wasn’t thrilled we were staying at the house before it is really complete, even though they have gone over schedule a half dozen times already. He wasn’t terribly accommodating when we arrived to only about half the electrical fixtures having been installed. There were also a couple sinks not quite in working order… one fixture in our shower is hooked up wrong, and the wrong refrigerator was delivered. There is no glass on the guest room showers, nor a single mirror in the entire place, and numerous cabinet faces yet to be installed. Also, the flimsy make shift front door that is in place has about a 2 inch gap on the bottom, and flew open in the wind about a half dozen times. But guess what??? We made do. And we made do in an absolutely gorgeous home in the most amazing setting and we are truly thankful.

I arrived last Tuesday afternoon and met up with our interior designer and her partner, the architect. They are a magnificently talented pair and we are lucky to have them both on this project. I am not a modern home kind of gal. I like traditional, and french country, and a little shabby chic thrown in. At least that is what I gravitate towards when given a choice. This time though, the lot size and the dozens of building restrictions and requirements dictated a much more contemporary design than I am used to. Because of that, I let the architect have his way with this house. I stood back and watched and barely made a peep because I didn’t want to get in his way. What a spectacular result!

By the time I arrived at the house last week, I was on day eight, I think, of a horrible head cold/flu. I had planned to unload the car in daylight. The car was filled to the brim with everything we would need to have our family stay at this completely empty house for three days, plus make a big Thanksgiving dinner. Unfortunately there were so many people still working on the house and some of the furniture was being delivered and some strange little local guy was supposedly “cleaning” up after the workers but mostly he followed me and the interior designer around like a puppy, just talking and getting nothing done. I decided to wait to unload my car until after everyone had left. Except the turkey. The turkey was loaded immediately into the temporary fridge. Unfortunately by the time everyone left, it was dark and stormy, basically pouring down rain. There is very little light on the front of the house and no street lamps at our end of the street. I decided to just wait until morning.

Another one of those things that has not been installed yet, is window coverings. So, I woke up with the sunrise to the neighbor standing on the berm between his house and ours supposedly staring out at the ocean. I have never seen him stand there before and I had no idea how long he had been there, but if I had a full view of him, he also had a full view of me. Thank goodness I was sensible enough to actually wear my clothes to bed. I started unloading my car and was done by 8:00am. The fence guys showed up at 7:45am, so I was pretty glad I was up early. The plumbers showed up at 9:00am, which helped a lot because before they showed we only had one working sink in the house.

I proceeded to work around the workers and prepare a couple of my Thanksgiving dishes in advance. The rest of the family was due to arrive between 3-4 that afternoon and I knew once they arrived I would get nothing done. In the end, me, my boys, and the Pragmatist’s girlfriend managed to make a 17 lb. turkey, mashed potatoes, gravy, stuffing, (2) pear tarts, a pumpkin pie, braised cabbage, and four loaves of fresh homemade brioche in one 30″ oven. Miraculous, I know!!! To give Blue Eyes some credit, he cleaned up after all of us. Dinner was a pretty simple affair. My mom brought sweet potatoes and my sister brought green beans. We had a rather large charcuterie, cheese, fruit and cracker board as an appetizer.

The Pragmatist’s brioche loaves. He is really into making bread right now but this was his first stab at brioche.

These are a few of my favorite things… (I obviously filtered the hell out of this on instagram. I love instagram) 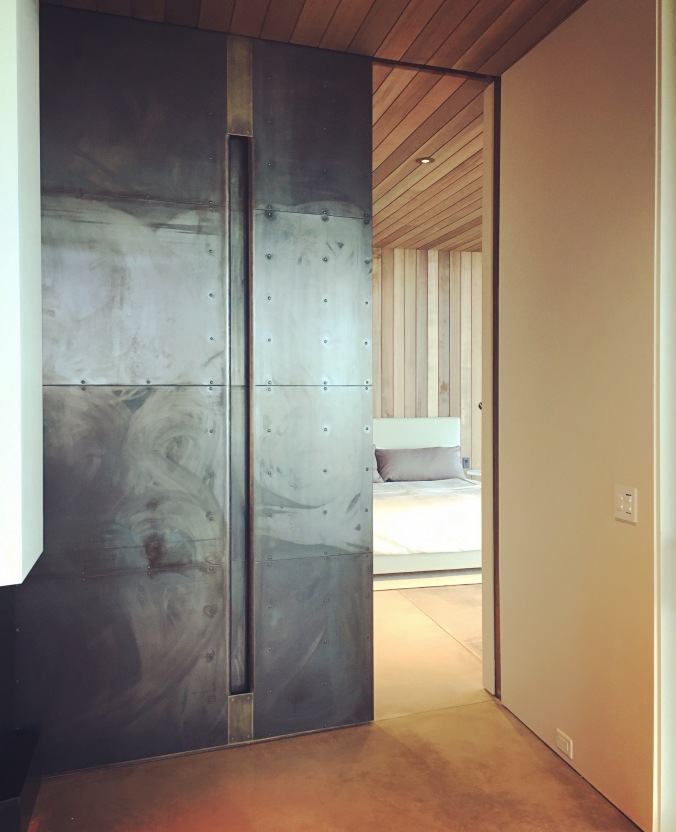 The steel and brass slider between the master and the living room.

My new happy place. After unloading the car on Wednesday morning, I sat here for a bit, drank a cup of tea and read my book.

The heated concrete floors are AMAZING!!! More pictures to follow when things are more done. I would post a picture of the front, but there is garbage out front, a lot of mud, and a port-a-potty, so no. Not this time. After landscaping I will post a picture. 🙂

But it’s true, I am a lucky and thankful girl! ❤

26 thoughts on “I am truly thankful”