As previously mentioned, we recently returned from a business trip to Japan. We love Japan. It is like a second home to us. Our trips to Tokyo are spent with Blue Eyes in meetings and me working from the hotel, plus some time, whatever we can carve out between all of our schedules, with my brother GQ, and his little family. When we are lucky enough to squeeze in a trip to Kyoto, we often go to some of our favorite spots from when we lived there in the mid 80’s. We most frequently go to Kiyomizu-dera, and Kinkakuji (the golden pavilion). This time, however, we decided to change things up a bit. We were in Kyoto for three full days and Blue Eyes only had away meetings on one of those days. We were also there on a Sunday (which was Saturday back home) so no meetings or work that day at all.

Honestly, most everything in Kyoto is “cultural,” but this time Blue Eyes did some research and we decided to do a bit of a flea market/treasure hunt themed Sunday. The weather was beautiful and we headed to To-ji Temple for the antique market. It was fun. We hadn’t been there since 1987. Blue Eyes picked up an old metal tea pot for his tea house back home.

Our favorite hotel in Kyoto is the Ritz Carlton on the banks of the Kamogawa River.

The tall pagoda at To-Ji Temple

After the flea market we headed to the craft market that was being held outside in the Garden of Fine Arts. I found some treasures for the beach house there, hand-painted tea cups and dessert plates, and handcrafted wood serving platters. I’m sure photos of these will show up at some future date, but for now they are still wrapped up tight and ready to go to the beach house this weekend.

From the craft market, we ventured over to the Kyoto Botanical Garden. The day was just too gorgeous not to see what they had on offer. There were lots of gorgeous botanical plants in the greenhouses, and a lovely display of winter cabbage arrangements that were being judged for a competition, but my favorite were the outdoor winter camellia blooming near the evergreens. It was so nice to see so much color in the dead of winter.

After Monday’s Osaka business meetings we had just enough time to head to Fushimi-Inari and its gorgeous orange torii gates before Blue Eyes had another meeting in the area. This spot is iconic Japan and we hadn’t been there since we lived in Fushimi in 1987. The shrine and its gates are as beautiful as ever. 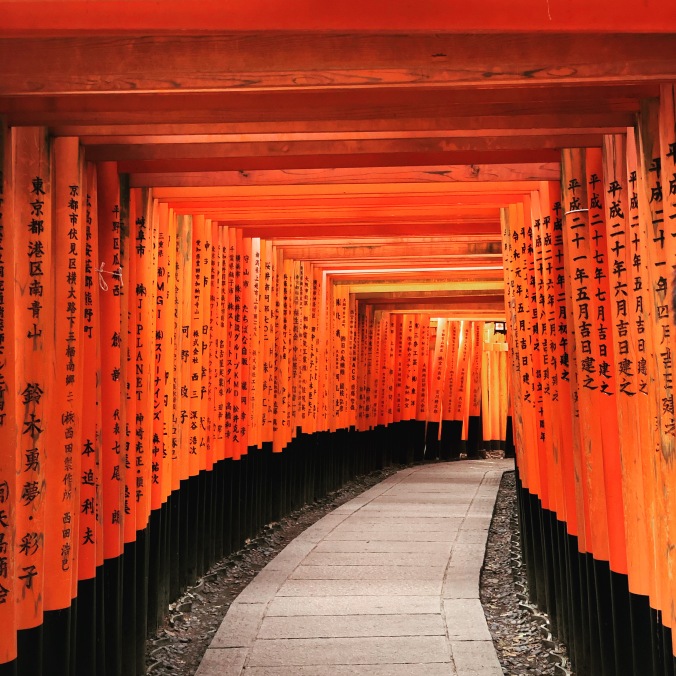 Each of the thousand orange torii gates are donated by a business.

Main Entrance to Fushimi-Inari on a beautiful February day.

Most commonly photographed area of the gates (it’s actually an exit of one of the many area pathways). We had to stand here for a little while waiting for a chance when no one was coming down the path. This is a very popular shrine.

Tuesday, our last full day in Japan was spent shopping for gifts to bring back for The Peacemaker. He loves Japanese crackers and sweets and Kyoto has lovely shopping.

On the famous Teramachi Shopping Street in Kyoto we passed by a 150-year-old sukiyaki restaurant that is very special to our family. Blue Eyes’ Japanese “grandfather” and my sponsor when I lived in Japan decades ago, Kenji, took us to this restaurant for dinner that first winter I was in Kyoto. He also took us here the first time we visited Kyoto with our boys. Kenji is now 98 years old.

And in case you thought I forgot to eat while in Japan, you know I didn’t. Here’s a couple photos of my favorites. 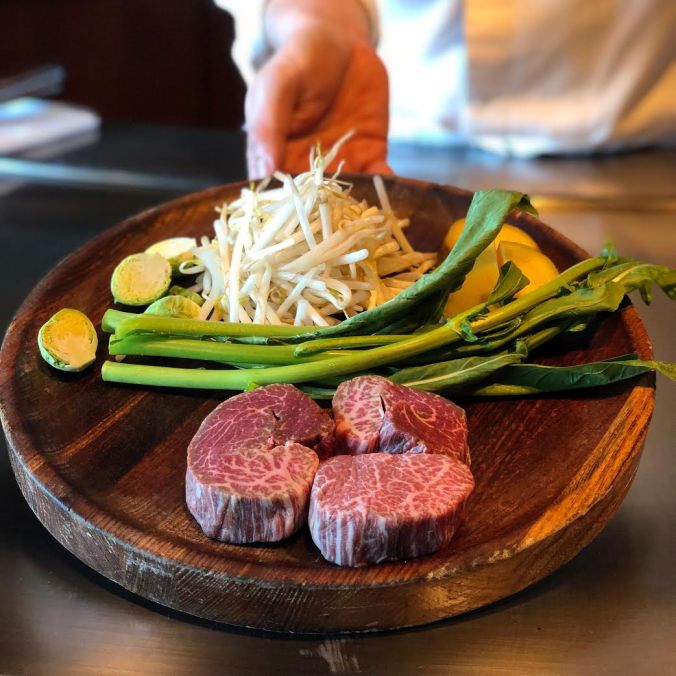 We were set to have breakfast with Kenji on our last day in Kyoto. Unfortunately he called us about an hour before we were due to meet him at our hotel restaurant to let us know that he had double-booked himself and wouldn’t be able to get there for another hour. Unfortunately, we had a Shinkansen back to Tokyo to catch.  He was so apologetic. The busy life of a 98-year-old Japanese man, ha.

As we were packing up, I got to thinking about Kenji. Although Kenji was actually born in Vancouver, Canada, he spent most of his life (from childhood) in Japan. His English is very very good. It was always part of who he was because he had dual citizenship and a Canadian family that he visited often, still does. He also worked in the United States quite a bit. Kenji had a lot of siblings, most of which are gone now, but I think he still has an older brother, and maybe a couple younger siblings. When I met Kenji, he was already 64 years old. At that point he had been friends with Blue Eyes’ father since the 1960’s, a couple decades. He had been at Blue Eyes’ Bar Mitzvah back in 1976. He had also been married to his sweetheart for more than 30 years. He was a very successful businessman.

I don’t pretend to understand some Japanese customs, especially the lifestyle of a Japanese businessman. I know Kenji adored his wife, but they could never have children, and Kenji spent a great deal of time after work in hostess clubs, geisha houses, and the like. We found out a few years after Kenji and his wife attended our wedding, that Kenji had a child with his secretary. Apparently it has been common custom for Japanese business men to have mistresses. I’m not sure having children with the mistress is so common, but apparently the relationships are. The wealthier the man, the more mistresses. I’ve never much thought about this because I don’t live in Japan. It’s distasteful to me to say the least, but I don’t live in that culture and I have never studied it nor asked a Japanese wife what she thinks of the “tradition.” I’m pretty sure it is not modern custom.

Kenji’s wife died of cancer about 10 years after we met her. Kenji never remarried. His daughter is a couple years older than our oldest son, but she was born before the wife died. I have no idea if she knew about the child, but I’m guessing she didn’t. My mother in law was good friends with Kenji’s wife. She welcomed them into her homes many times. Mother in law found out Kenji had a mistress after his wife passed. From that point on, she continued to welcome Kenji (not much choice since he was good friends with FIL), but not the mistress. MIL felt very strongly that she was betraying Kenji’s dead wife by even acknowledging the woman. The mistress is about my age, and a very accomplished businesswoman herself at this point. The child was educated in America and still lives here. She’s in her early 30’s.

We had a funny conversation with Blue Eye’s parents when we had dinner with them in December. Mother in law was adamant that Kenji is no longer with the mistress, mother of his child. She said that Kenji now has a lovely woman who takes care of him in his old age. Father in law didn’t say anything. The thing is though, Kenji is still very much with the same woman he has “been with” now for more than three decades. I’m not sure who created this other “caretaker” woman, but it seems to be a palatable story for mother in law, so who am I to rock her boat.

I don’t know if it is still custom for Japanese businessmen to have mistresses. I don’t understand why people would want to complicate their lives in that they have demanding jobs, a wife and children, and then women on the side. It’s seems more stressful than it is worth. I wonder if Kenji purposely had a child with the mistress/secretary because his wife couldn’t have children. I doubt it.

Blue Eyes and I had a long conversation about all this this morning. We do business with A LOT of 30 & 40-something Japanese businessmen but none are at the stature of Kenji or father-in-law’s other friends, most founders of large well-known Japanese companies. Apparently men of this stature traditionally have been the backers behind the geisha houses and hostess clubs. There are/were most likely a lot of perks that came along with that ownership, even though geisha are not courtesans (prostitutes). When men and women spend a lot of time together, we all know what can happen. I think just like everywhere, there are also Japanese men who are quite disgusting. Blue Eyes told me about GQ’s boss from when he first moved to Japan. The man died quite a few years ago, but GQ traveled with him all over the world as a translator in those early days. This man brought his mistress with him on all the trips. I can only imagine how uncomfortable that was for my brother. I actually didn’t even know this. GQ does not know about Blue Eyes’ secret life, and we plan to keep it that way.

I do think the mistress/concubine tradition is dying out. My impression is that Japanese relationships and marriages have become more westernized. Meaning they’re based more on love versus arrangement for social status. I will say, that Kenji (like my dad) has lived life on his terms. He has enjoyed himself thoroughly, but hopefully not at the cost of his wife’s happiness all those years ago. Blue Eyes says that the wife traveled extensively with friends, so I’m thinking she figured out how to live well under the circumstances. Even in the 1980’s, when Blue Eyes was a Japanese “salaryman,” the custom was to go out drinking with co-workers after work to unwind, getting home very late and then getting up the next morning early and starting all over again. The wealthier men spent their time at hostess clubs and geisha houses. Wives were home with the children, managing the household. It never sat well with me, especially when I hadn’t seen Blue Eyes for what seemed like days and he would roll in at 10 or 11pm, exhausted, and having had to share in the cost of the alcohol even though he didn’t drink. I wondered how Japanese wives put up with it.

I think Japanese men like Kenji are a dying breed. The men we know have traditional marriages built on love and they spend as much time as they can with their children and as a family. I asked Blue Eyes specifically about a number of the men and he said he couldn’t imagine them having the time or inclination for a traditional mistress. Not being Japanese or growing up with their customs, it’s very difficult to understand some of them, but personally I like the idea of marrying for love, having both parents raising the children, and no one needing a piece on the side as part of their daily lifestyle.