It’s been a rough couple weeks. Processing my dad’s death hasn’t been easy, and then there was the graveside funeral and memorial luncheon less than a week ago. My dad touched a lot of lives, married into a huge family, had his own bunch of kids, nine of us, who then had 17 grandchildren, plus 77 years of friends. So even though the funeral was up in a rural part of Washington State, lots of people came to say good-bye. As previously mentioned, I’m his oldest daughter, from his first marriage. In the middle of my grief, people walked up to me that I hadn’t seen in 30+ years. A number of my step mom’s family came from Arizona. I did a pretty good job of figuring out who everyone was without making a fool of myself, but it was a strange position to be in. I am not “good” at funerals. I bawl like a little baby. It’s impossible for me to maintain any kind of composure, so I just don’t try. I received so many deep, deep hugs, from people who adored my dad, that being sad just didn’t seem like a proper emotion. I know we will all miss him, but we all also feel very lucky for having known such a person. As Blue Eyes put it:

He was a bear and he was an angel.

The day before yesterday we lost my father in law, Kat’s Dad (Papa) and I miss him so much. He could be so loving and kind and so cruel and stubborn. He was a contradiction. He was difficult. He was joy. He could make you laugh so hard. I can remember laughing so hard with him and Kat that it hurt. He loved to have fun. He loved life.

My mom and step dad attended the funeral. They brought my sister with them. She wasn’t going to come. Her borderline personality disorder doesn’t do well in big crowds in the best of circumstances. She did a great job at the funeral though. As emotional a person as she is, she holds up much better than I do at funerals. When they were getting ready to leave, I hugged my mom and thanked her for bringing Tiff, and for being there. Her response back to me, “Kat, I wouldn’t have wanted to be anywhere else. I will always be here for you.” So, it wasn’t about any grief she may have had for her ex-husband, or her own desire to “pay her respects,” but in fact, she was there for me. It’s difficult for me to process these facts sometimes. That people would come to something so not fun, just to be there to support me. Likewise, my friend Dee (mentioned many times early on on this blog as the friend who absolutely could not understand what I was going through, and admitted it, but was there for me through everything anyway) showed up once again, just to be there for me. She and her husband drove the three hours there and three hours back to Portland, all in one day, to show up for me. She even orchestrated a photo of all nine of my dad’s kids. Something my step mother and all the rest of us will cherish.

I’m sitting here now at one of my favorite hotels, lying on the big comfy bed listening to a street singer down on Ocean Walk, looking at the Santa Monica Pier, and appreciating life. We’re down in LA for another couple’s session with the trauma therapist. We spent four hours with her yesterday. 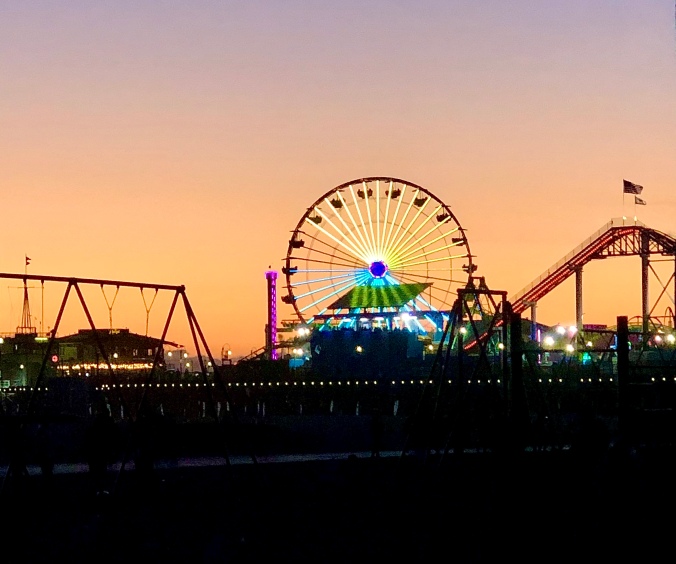 16 thoughts on “Taking a little time”