I did something I rarely do. I went back and looked through some of my old posts. I started at the beginning of 2015 and did a quick perusal of where I have been over the past year. Wow. Eye opener. I have made a lot of forward movement out of the dark recesses of the cavern my husband threw me into. I dare say, I climbed all the way out and now I merely suffer some harrowing memories of my time there. Even more astounding, however, based on the words I myself wrote, Blue Eyes has made a quantifiable amount of progress in his recovery.

Despite my best efforts to curl up in my bed and throw over a blanket wishing the world would just forget about me, last year was a busy year. I hit the one year anniversary of d-day early in January 2015 while in Japan on my first trip there since finding out Blue Eyes had taken his long term acting out partner to Tokyo three times. While still having panic attacks and moments where I let my mind drift away to nothingness (I remember how much easier it was to exit that sad, horrible, painful spot in my head, while leaving my body behind as a place holder), we seemed to be jetting all over the first half of the year. It was trial by fire in terms of facing the triggers that haunted me at airports, hotels, and cities they had been to together. As silly as it sounds, however, all that traveling did allow me to face some of my fears square on, and take back those places and reclaim them as my own.

Sitting in a hotel room, looking across to another hotel room where my husband had shared intimate moments with someone other than me, I wrote a post titled We are all just players in his game. In that blog post, I outlined what it was like watching my sex addict husband, early on in his recovery, play at the game of life. I wrote about how he manipulated people and used people in order to feed his own insecure ego. When reading my closing words for the post

When my husband is in addict mode, all the people around him are just players. We are interchangeable. We are faceless, and nameless, and we merely fill space in a game he designed so that he did not have to live in reality with the rest of us.

I could feel my own anger and resentment and frustration. I am astonished that I wrote those words just less than a year ago. At the time I really didn’t know whether he would be able to change. Now I know things are different. I know Blue Eyes has changed. He no longer behaves in that manner. He no longer goes into those hyper addict states. His moods no longer take on a life of their own. His feet are planted much more firmly on the ground. I no longer feel like a faceless, nameless nobody in his life. I no longer feel like he is subconsciously manipulating me to feed his own demons. With time and mindfulness, he has managed to actually and honestly change.

As I quickly scrolled through post after post, I noticed other things as well.  I noticed that I was still at times basing my own healing on the recovery of my husband. Something I have learned about myself over the past year is that my enjoying my life and feeling like I am making good, honest and intelligent decisions is not dependent on my husband’s sobriety or his becoming a better man. The only thing dependent on how my husband behaves is my marriage. But, my marriage does not define me or my life. The lingering effect of everything Blue Eyes has done to feed his addiction is that I now know how truly fragile that tenuous thread is that is keeping together all the good parts of our marriage. As the weight of all he has done stretched the fabric of everything I cherished about our relationship, I could feel the ripping and tearing and we have just begun to sew the pieces back together. The strength that I thought was there, wasn’t and many times still isn’t. I know it is stronger than it was a year ago, and it will continue to become stronger as we both heal, but things will truly never be the same as they were before, because before, was a lie.

When Blue Eyes’ brother died, I posted some comments on Facebook about the pain I was feeling. My good and wise friend, Dee (someone who knows a thing or two about loss and grief), responded with this quote by Rose Kennedy, a lady who has also known the deep pain of loss:

It has been said, ‘time heals all wounds.’ I do not agree. The wounds remain. In time, the mind, protecting its sanity, covers them with scar tissue and the pain lessens. But it is never gone.

We are a sum of all the things that happen to us, and how we handle those things, in our life. I know both Blue Eyes and I have made a tremendous amount of progress. Reading my own words I can feel the pain of my wounds when they were but one year old. They were more open and raw and they caused me much more angst, and pain, anxiety, and fear. There is space now between the pain. Some of that scar tissue perhaps, is filling the void and allowing me to grow and gain wisdom from what has happened. I am slowly, surely, taking back my life. I know there will always be scars and I know those scars represent who I am. I own those fucking scars. Bring on 2016! I’m ready. 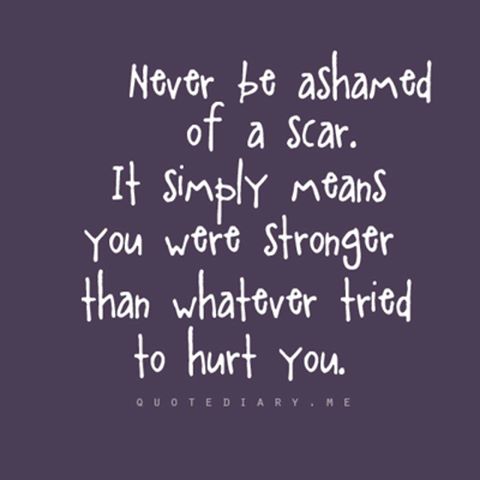 27 thoughts on “Looking back, part one”