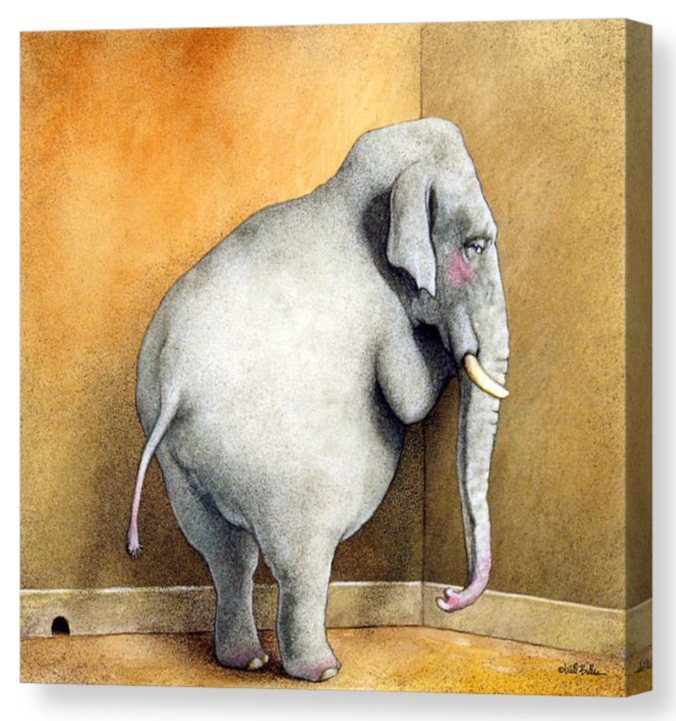 I ran across an old blog post yesterday and there was a comment by Pablo’s Wife, one of my favorite betrayed wife bloggers. She hasn’t blogged for over 2 1/2 years, but hers was one of the first, if not THE first blog I followed back in 2014. I love her wit and her honesty.

In her comment on my post, she said this:  “All in all, life is pretty good, apart from the whore shaped elephant that continues to sit in the fucking corner 😉”

The topic of the blog post was about time healing wounds. Earlier in the comments Paula (another favorite betrayed blogger and friend) and I had discussed the topic of bringing up the other woman and using the term “girlfriend” to describer her. Paula’s comment:

“I think the use of the word ‘girlfriend’ (considering we are all middle aged!) is somewhat hilarious – but also quite ironic, in that both the kids and I jokingly referred to her occasionally as his girlfriend during their affair – totally oblivious to the truth of the title! It was supposed to be a JOKE, DAMMIT!!!”

“I did the same with BE. After that strange email all those years ago, when the phone would ring late at night I would say… “hey, maybe it’s your girlfriend.” Not ever saying it because I actually believed it. It was a joke. Joke’s on me.”

Photo by Chuttersnap on Unsplash

They’re always there, the secrets and lies that swirled around us and our honesty and integrity, some days a dark cloud, some days barely a wisp. It’s a bitter pill to swallow for sure and we (the betrayed wives) aren’t the only ones affected.

We’re planning a business trip to Japan. We leave in a little over a week. I have both me and Blue Eyes set with airfare and hotels. My brother, managing partner in our company, came into my office today to discuss his hotel. He won’t stay at the same hotel as us as he deems it too expensive, but he wants to be as close as possible. He doesn’t spend the same kind of time working from the room that I do. He’ll mostly be traveling around Tokyo, and also at our hotel during the day for meetings and meals. I recommended a nearby hotel to him, the one Blue Eyes used to stay at. The hotel he went to with the other woman. It used to be Blue Eyes’ favorite Marunouchi hotel. I never stayed there. Anyway, when I mentioned the hotel to my brother, he told me in no uncertain terms that he wouldn’t stay there, ever. I had been looking at my computer screen, but at the tone of his voice, I looked over at him and he had the “you know why” look on his face. He knows what trips and to what countries and what hotels Blue Eyes took the other woman. He is still affected by the lies and betrayals of Blue Eyes. He has known my husband since he was TWO YEARS OLD.

I just said to him, “the elephant in the corner?” And he said, “yeah,” and clearly did not want to discuss it further.

I don’t want to stay at that hotel at this point, but I probably could. The fact that he is refusing to even consider it an option, really says something. Blue Eyes’ response when I told him what my brother had said: “I love that kid.” But I’m sure he never thought of how he was hurting him, or our own children, when he was betraying us all. If I was blocked out, they were really blocked out. Dishonest, selfish, and hurtful decisions people make have far reaching consequences.

8 thoughts on “The elephant in the corner”