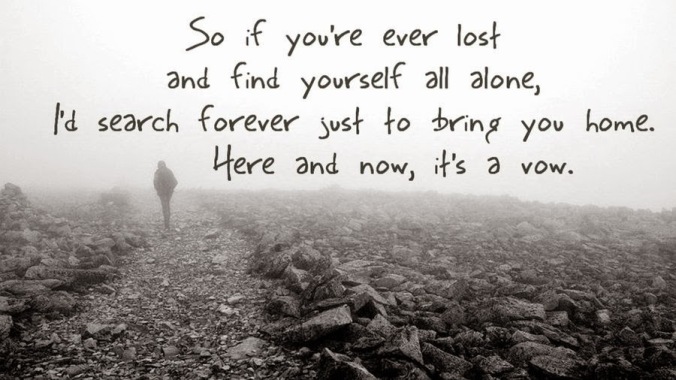 The reason I know I cannot change my husband, I cannot make him better, I cannot heal him in any way, is because I have been here all along. If it was my job to heal him, I would have done it already. If my presence was enough to make him the man he wants to be, it would be so. I have said this all along… I wasn’t enough before, and I won’t be enough going forward. That doesn’t mean he cannot heal. That does not mean he is not a worthy life partner. It only means that he will have to do the hard work, by himself, for himself. This is a lesson we must all learn. But if he finds himself wandering, lost and alone, I will go to meet him. I always have, and I always will.

From the moment my husband’s secret life was revealed, I innately understood. When he said those words, “if you knew the truth about me, you couldn’t love me,” I knew. I knew he was an addict. I have known addicts before. I know this is their mantra. I did not stop to question what his drug was, I merely knew, at that moment, that he was broken, and he needed a drug to cope with life. I had to learn about sex addiction first hand. So did my husband. As the secrets spilled out, we learned together how insidious his disease.

I am here to walk beside him on his journey. I am here to love him unconditionally, to love him in all the ways he wasn’t loved before. I can understand him, but I cannot change him. I can help him understand me, but I cannot change the way he behaves towards me or anyone else. Those are lessons he must learn on his own. I know he is worth the effort. He is working so hard at his recovery. It is not easy, for either of us.

There is a commenter on my blog. She has been here for quite some time. In the beginning, she did not really understand. I don’t know how anyone could understand sex addiction if they had no experience with it. It sounds so hedonistic, on the surface. But really, all addictions do… until we know the truth. Sitting around drinking all day, or engaging in illicit drugs, living life high on meth or heroine. These addictions were initially sensationalized. Addicts were lazy. They had control, they just refused to use it. They were self indulgent. Now we know the truth. Addicts use drugs to medicate wounds, to fill empty spaces, to cope with a life that has most often shown them loneliness, abuse, neglect, and trauma. After watching my husband, someone I had known for 30 years at the point of discovery, spill his pain all over me, all over our life, I knew this wasn’t about some flirty, sexy, titillating roll in the hay. He wasn’t looking for a new wife, for a new life. I knew he was living a dirty, filthy, deceitful existence and he hated himself for it. He lived that life right along side his successful, fulfilling, happy, devoted life with the rest of us. He was living a symbiotic existence. The happy life fed off of the addicted one. It had always been so for him.

Three years into recovery, he has made significant changes. He has a long way to go. Nothing worthwhile is easy, as they say. He has years of abuse, neglect, and addictive behaviors to overcome.

Now, the reason for this blog entry. I received a comment to my recent post titled ‘Anonymous.’ As I was writing one of my marathon responses, I realized I just needed more space, so I brought the whole thing here.

Thanks, Moi. I guess the thing that warms my heart here, is that you now get it. I know at the beginning we definitely had our differences. Sex addiction is like any other addiction and with my husband, yes, his addiction grew out of childhood wounds, specifically neglect and abuse. From adolescence forward, he really believed he needed his drug to survive, and maybe he did. After dozens of hours of therapy, the specialists do believe he was neglected and abused from the crib. He is only in therapy because he wants to be able to overcome his childhood abuse and be happy. After knowing my husband for 33 years, I still cannot begin to understand how he feels. But I do understand that he pretended at being happy and it was all based on having a drug to cope. I think he desperately wanted to believe in himself, in the good in him, but he was beaten down for so many years… more than 50 years! He still harbors those deep feelings of not being good enough, of being a bad person, of not being worthy of love. You are correct, the abuse was endless… even to the point of the last communication his father sent him, which stated that “they were so disappointed in him as a son and as a person that they would take his name away from him if they could.” They said this to a successful 50 year old man, married for 25 years with two grown sons. They were still trying to strip him of any happiness he might have garnered over his life. They could no longer control him with money, or anything else material that they had, so they just continued to abuse him emotionally, like they had always done. There were no genuine hugs, no “I love you’s.” The last time he saw his parents in person, they wouldn’t even give him a perfunctory hug good-bye. His father physically turned away from him. All just because he was no longer playing the game by their rules. He really hadn’t done anything to them other than not go see them on their terms, on their schedule.

The interesting thing about BE is that he seems to be the opposite of the man you describe above. BE has some distinctive happy childhood memories (that generally don’t involve his parents) and he tends to blow those out of proportion. He inflates the happy trying to convince himself, I think, that he was happy or that he is happy, when deep down he most likely believes he doesn’t deserve happiness. I think it is a subconscious feeling left over from the beat downs of his parents. People that know him as an adult think he is an incredibly happy, albeit quirky, person. Thus the happy memories of the spot in Tokyo. He wraps a lot of happy memories around food. Food being a tangible thing that brings him comfort. I guess for me I wished he had pulled out a happy memory where we had been together, versus one where he was with the other woman. I know he doesn’t really differentiate when he is in that place in his head. That place of trying to cope by exaggerating memories and feelings. Although the therapy BE has received has been crucial to pulling those memories of abuse out of the hidden recesses of his stunted mind, and he needed to bring them out into the light, his recovery path also includes 12 step and mindfulness meditation/Buddhism and both of these help him stay grounded and in the moment. He is still learning, but I believe the most important facet of his recovery is not denying his own history, his abuse. When we push those things down, basically when people tell us that we are adults now and we should just be able to get over it, it causes us to find other ways to cope. We are not all addicts, but those of us who are need to learn to validate ourselves. To let ourselves grieve and heal from what was done to us.

We all need a path out.