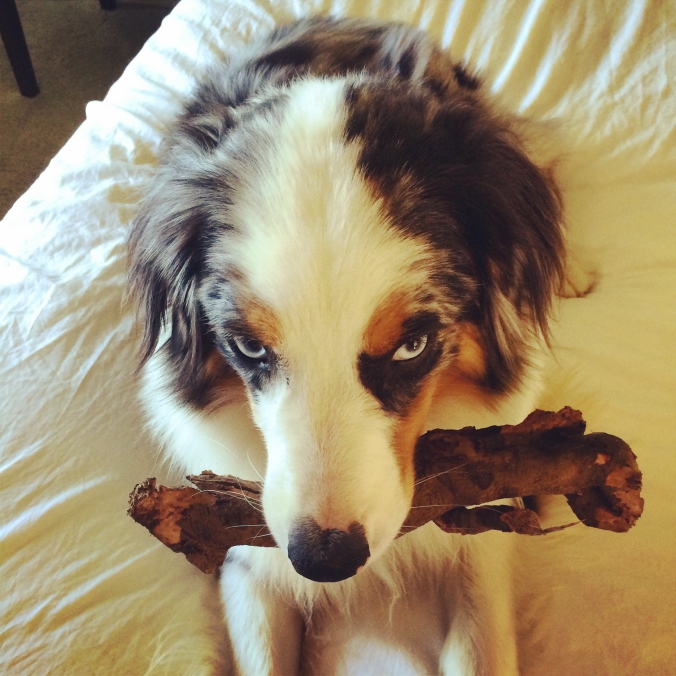 That’s me. A dog. With a bone. Mean comments give me the opportunity to purge, and apparently I am not done venting yet. When someone denies my husband’s sex addiction diagnosis, it doesn’t make me question his addiction, it makes me question the motives of the denier, but it also causes me to think about just exactly what has transpired to get us to where we are today.

I have written about the relationship my husband had with his long term acting out partner (his third extramarital sexual relationship). They saw each other very irregularly. It started with a Craig’s List personal ad in early 2005 saying he needed to be nurtured, held, loved. He says he wrote it not knowing what would come of it, if anything, but it was exciting to him, forbidden, shameful, secret. He had been living with shame nearly his whole life, and shame ignited his secret world. He created the ad during an especially stressful time with his family. The ad implied he was single and needy. Blue Eye’s pathology does not include strip clubs, massages, prostitutes, chat rooms or other internet sex forums. Previously he had groomed women he worked with. This time, there were no handy women on the hook. This was his first (and last) ad. An email response by one lonely, older woman turned very quickly not into a romance, but into a sexual outlet for my husband. A dark secret dirty fantasy world. He knew what he was doing was wrong and disgusting, but he did it anyway. It took the edge off everything else in his life that he had trouble coping with. The other woman would write “dirty” stories. I would call them erotic, but they just weren’t. I had the rather disgusting reality of reading part of one. Ew. They shared those plus sexually explicit conversations, all by email. There was no wining and dining. There were a handful of communications, all sexual and then a hook up at her house. A quickie where she played out his sexual fantasy. There were no deep conversations over candlelit dinners. There were no long nights chatting and getting to know each other. There were no elaborate bouquets of flowers, love letters, or walks on the beach. They, truthfully, have very little in common as human beings. What was the glue that held them together for eight years? For him, his desire for secret sexual liaisons and the fact that she was easy pickings. For her, sex with a man, any man that would have her.

At the end of 2007, she decided to up the ante. She was no longer willing to have sex at her house. If he wanted sex, he needed to go away with her. He denied her that intimacy, that familiarity. He was not looking for a mistress. After months of no contact, and as his addiction enveloped him with a vengeance, he concocted the idea of taking her on a business trip and in April 2008, he told her she could travel with him to Japan if she paid her own way and followed a number of elaborate rules he created in order not to be found out, and not be seen in public with her. She agreed. They took 11 trips together from 2008-2013 ranging from 1 to 10 nights. All followed the same demented course. In the end, she hated the trips because he worked most of the time and spent no time with her, except of course, to have sex. There was no romance, just sex, and arguing, and violence on her part, but he continued to engage in this behavior a couple times a year to get his fix.

Amazon Description: Pia Mellody creates a framework for identifying codependent thinking, emotions and behaviour and provides an effective approach to recovery. Mellody sets forth five primary adult symptoms of this crippling condition, then traces their origin to emotional, spiritual, intellectual, physical and sexual abuses that occur in childhood. Central to Mellody’s approach is the concept that the codependent adult’s injured inner child needs healing. Recovery from codependence, therefore, involves clearing up the toxic emotions left over from these painful childhood experiences.

Blue Eyes read the book and started self reflecting on the decisions he was making and possibly coming to the realization that there were underlying reasons he had such a severe lack of coping skills. He even purchased a second copy of the book for me to read. He carried the book around with him like a security blanket. He talked about attending a Pia Mellody workshop at the Meadows in Wickenburg, Arizona. He asked if I thought it a good idea if he went to a workshop. He basically was asking my permission to go. I now realize this behavior is caused by his own insecurity. When he asks me if it is okay, or a good idea, if he does something, it means he is scared. I told him he should do what felt right. It seemed like a good way for him to try and come to terms with FOO issues that were seriously bothering him. Of course I had no idea of his secret life, but I am always supportive of any person’s desire to better understand themselves and their behavior, especially Blue Eyes. By this point he had ended his relationship with the other woman and although he did not divulge his secret, he was determined not to cave to the blackmail by the other woman (a part of their ongoing relationship… she threatened him, he re-engaged). At the point when he decided he would never re-engage with the other woman again, she started calling me in earnest, but he did not give in. He did erase her calls from my phone though. I know he did not have any intention of telling me about his secret life. He knew if he told me the truth, our marriage would be over. He was sure of it, and that was never his intention. On December 11, 2013, Blue Eyes decided on his own that he needed to stop masturbating because it felt wrong to him. He felt his masturbation and porn were out of control too. We know he never could have maintained his sobriety on his own, without proper recovery. Nearly two months later, after he was diagnosed as a sex addict, he started attending regular 12-step meetings and that day, December 11th, will always be his sobriety date. The date he gave up the last of his ritualistic sexual addiction acting out behaviors. I believe 100% that he gave up his acting out behaviors on his own, however, he needs structured recovery in order to learn to properly cope with his life. He has already spent extensive time in therapy on his childhood wounds.

August 14, 2013 is the day Blue Eyes finally excised the other woman from his life. January 11, 2014 was the day Blue Eyes’ secret life was revealed. On December 11, 2015, Blue Eyes will receive his two year sobriety chip. The healing and recovery are just beginning, but the journey is real. I could call him a cake eater and leave him, but it wouldn’t change the fact that he is a sex addict. I am not making excuses or letting my husband “off the hook.” He is responsible for all his behaviors, then and now. I have, however, acknowledged and live with every day the fact that Blue Eyes is not the man I thought he was. That does not mean I don’t love him, and it does not mean I am throwing in the towel. Not at this time anyway.