On our recent business trip back east, we stayed at a hotel in Boston for four nights. When you get off the elevator of the 14th floor of this hotel, there is a little grouping of paintings, with this quote in the middle: 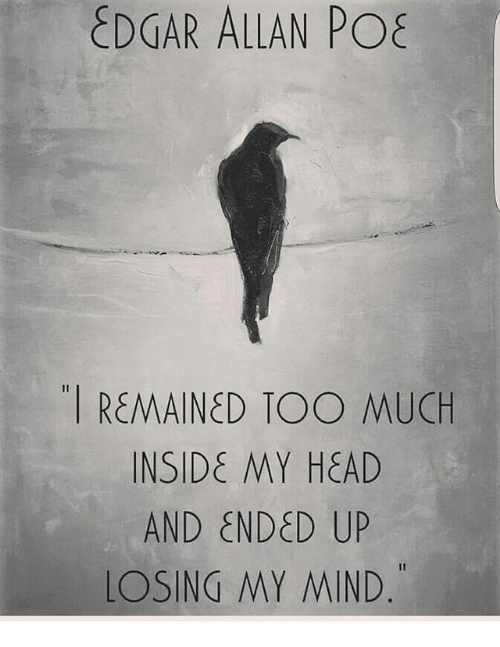 After a few arrivals to our floor, and Blue Eyes looking at the sign, he decided to take a photo and send it to his SA buddies. It spoke to him. I told him I had used that Edgar Allen Poe quote on my blog ages ago. It’s one of my favorites. I assumed I had used it in relation to Blue Eyes and the way he lived for decades (and still does sometimes), inside his head.

Out of curiosity I searched my own blog for this quote. It shows up way back in a journal entry, The Darkness, which I wrote on April 27, 2014, and subsequently posted to my blog on November 5, 2014. It’s one of a flurry of journal entries I posted in the first couple months of my blog, trying to tell my whole story, while also frantically wanting to catch up to current. I have always been a journal writer, but never before Fall 2014 did I think of posting any of my journal writing for the world to see. Something propelled me, however, in early October 2014 to do just that. But even after I did that, I didn’t think it would be seen, or read, or be up for debate! It was a bit scary to be honest, to hit that publish button for the first time. But then it wasn’t scary, it felt validating… a little tiny bit of the burden I carried was being lifted with each and every post.

The thing is though, that particular post is not actually about Blue Eyes. It’s about me. It seems there is always an inclination to believe an addict’s acting out partners are more like affair partners. It’s difficult to understand how they don’t have real romantic or loving feelings towards them. It’s incredibly difficult to not believe they were looking for someone to replace us. It was downright devastating in my traumatized state to think about Blue Eyes looking for someone to replace me… and even if he wasn’t trying to replace me, it was soul crushing to believe he needed more than me. That I somehow just wasn’t good enough. It’s difficult to reconcile decades worth of living and loving and family making and laughter, of intimacy, and compromise, the good, even the challenges, could be wiped out with a few sex acts. And if he didn’t want our marriage, our decades long partnership to implode on itself… why would he do it? It’s not like a diagnosis of sex addiction wipes out their culpability, or our massive esteem obliteration. The diagnosis brought up more confusion, not less.

In the post I talk about the things he said to the other woman to convince her I was a horrible wife. The fact that those words could come out of his mouth, for any reason, literally floored me. Today, I still think about it, like an irritating little gnat buzzing somewhere in the room, and every once in a while dive bombing my face. It’s not really hurting me, but it is annoying me. But back then? Back then it left me in a such a dark place I honestly did not know if I would ever recover. It was never really about the other woman, acting out partner, whatever she shall be called. It was about the space my husband’s brain was in that he could make the decisions he did, tell the lies he did, rationalize the way he did. That was what was devastating. That was what left me in darkness. That I didn’t know my husband at all. It was an obliteration of my reality.

For those first few months I did live quite a bit inside my head. I was afraid to reach out. I was afraid to talk about it. I was afraid of everything. So so so unlike me. The only people I really had to talk about things with were a few bad therapists. I honestly wish there had been a blog like mine that I could have turned to. I doubt I would have had the courage to reach out back then, but it would have been nice, I think, to at least know there were others out there going through what I was going through. Things have changed drastically since 2014. So here I am to say, there are others out there going through the same thing you are. We know how you feel and you’re going to be okay.

4 thoughts on “Will I be okay”